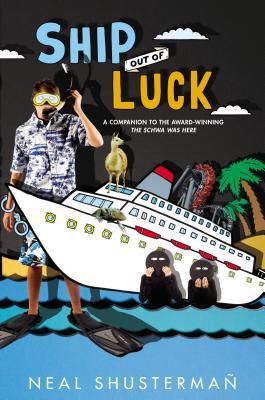 In honor of Old Man Crawley’s eightieth birthday, the Bonano family has been invited to celebrate with a weeklong cruise to the Caribbean aboard the world’s largest, grandest ship. But whether on land or at sea, Antsy can’t manage to stay out of trouble: He quickly finds himself the accomplice of stowaway and thief Tilde, whose self-made mission it is to smuggle onto the ship and across the U.S. border illegal immigrants from her native Mexico. When Antsy steps in to take the fall for Tilde, he becomes the focus of a major international incident and the poster child for questionable decisions.

Equal parts clever and riotous, Ship Out of Luck brings back the beloved cast of characters from Neal Shusterman’s acclaimed The Schwa Was Here and Antsy Does Time.

Having not read any of the previous books, I wasn’t sure what quite to expect with Ship Out of Luck. I decided to plunge into the book and think of it as a standalone, which worked well. Antsy struck me as a great character right off the bat. He obviously had a lot of history with getting in trouble and it was easy to see how things could get out of hand on a 7 day cruise for Old Man Crawley’s 80th birthday.

I loved the variety of characters. Lexie is a blind, rich girl – the granddaughter of Crawley and has her own unique problems during the cruise. Howie is a friend of Antsy who is invited along because Antsy’s brother cannot make the cruise. In order to get Howie on the ship, Antsy creatively makes him a fake birth certificate, since Howie has neither that or a passport for some weird reason.

Then there’s Tilde, a stowaway aboard the cruise who is set on seeking Antsy’s help and attention. Having the attention of a beautiful girl, Antsy cannot seem to resist helping, even with his elaborate way of trying to avoid her. The only question is what is Tilde’s end game and why involve Antsy in the first place?

I loved the banter between Antsy and Crawley the most, who have a repertoire that will keep you laughing throughout the book. In the end, you realize how much of an idiot, but overall great guy Antsy is, even if he doesn’t seem to think so. I will definitely have to read the other books now to get more about these wonderful characters.

Final Verdict: A hilarious novel that stands on its own but features an ongoing set of characters you will want to read more about. This one is swinging a little more into YA or upper MG with relationship situations occurring throughout the book.

4 responses to “Book Review: Ship Out of Luck”