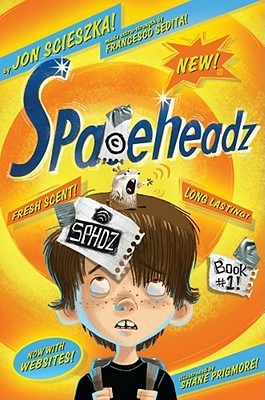 From the National Ambassador of Young People's Literature, comes the spaciest middle grade series this side of earth.  BE SPHDZ.

Michael K. just started fifth grade at a new school. As if that wasn't hard enough, the kids he seems to have made friends with apparently aren't kids at all. They are aliens. Real aliens who have invaded our planet in the form of school children and a hamster. They have a mission to complete: to convince 3,140,001 kids to BE SPHDZ.

But with a hamster as their leader, "kids" who talk like walking advertisements, and Michael K as their first convert, will the SPHDZ be able to keep their cover and pull off their assignment?

Michael K. is a new kid just wanting to fit in at a new school, but the two classmates he has to sit next to are out of this world weird – literally. This two kids claim they are SPHDZs, along with the class hamster. They were sent down to help Earth avert a horrible disaster, but they need the help of Michael K. Of course, Michael thinks these kids are really bizarre, so bizarre that they really could be aliens, but will he help them?

A hilarious story about breaking past social norms to help save the world. Definitely a series I want my students to read.

Michael K. is your average kid, wanting to fit in and just be normal. He also has enough of a conscious to want to help these kids – or rather – aliens.

Bob and Jennifer are hilarious. Those are the two aliens disguised as kids. They use commercial phrases and jingles instead of normal conversations – which is a very hilarious part of the whole book. The hamster is supposedly the leader which cracks me up because you can't understand anything he is trying to say throughout the book – simply comes out as an "eek".

Final Verdict: I think a lot of kids can relate to being the new kid or just wanting to fit in. I think this is a great book for 4th graders and through middle school.