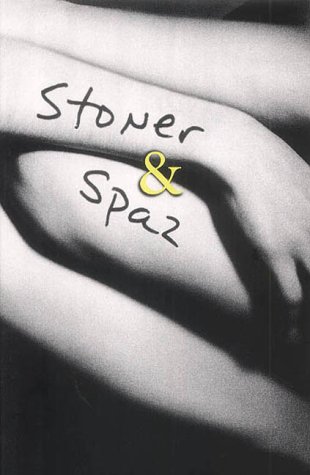 For sixteen-year-old Ben Bancroft — a kid with cerebral palsy, no parents, and an overprotective grandmother — the closest thing to happiness is hunkering alone in the back of the Rialto Theatre and watching Bride of Frankenstein for the umpteenth time. The last person he wants to run into is drugged-up Colleen Minou, resplendent in ripped tights, neon miniskirt, and an impressive array of tattoos. But when Colleen climbs into the seat beside him and rests a woozy head on his shoulder, Ben has that unmistakable feeling that his life is about to change. With unsparing humor and a keen flair for dialogue, Ron Koertge captures the rare repartee between two lonely teenagers on opposite sides of the social divide. His smart, self-deprecating protagonist learns that kindred spirits may be found for the looking — and that the resolve to follow your passion can be strengthened by something as simple as a human touch.

I've read some of Ron's books before, so when I was asked to do another tour for a different set of books, I jumped at the opportunity. I, of course, had to read the first one first. The title reveals a bit, but I never thought spaz would mean a kid with cerebral palsy.

Ben struck me right off as a bit stand-offish. And not just because he has CP. He tends to hang with himself at an old movie theatre and his voice instantly shows how much he hates his limp and the way that getting around isn't exactly easy. Then, he runs into Colleen, a well-known stoner who he knows is trouble from school. I love the description of when we first meet her as she's quite the impressionable character.

She snatches the money and points through the smudged glass while I take in the rest of her: ripped tights, an off-kilter skirt the color of a lime snow cone, leather jacket, and over that a ragged denim vest. She tosses my two dollars on the counter. "Keep the change." Her hair is tufty and ragged. She's as pale as a girl in a poem about maidens and moonlight. Then she looks at me. "You coming?"

"In a minute." In your dreams.

Alas, Colleen seems to have her eyes set on Ben, at first for some help with homework and then it turns into more. And what guy can turn down making out with a hot girl or even going all the way. Especially one who feels lucky to have a girl look at him twice.

But it's not just Colleen that motivates Ben to live a fuller life. His neighbor took a film class and convinced him to try out making his own film, even going so far as to lend Ben her camera.

This book was something I can't quite describe. I couldn't put it down. It was a bit of train wreck to watch Colleen, through her promises to be better, to stop using, and her attachment to Ben. I love all the other characters too, the ones he interviews for his documentary about high school, his grandmother who tries to keep him safe from Colleen and fails. And Marcie, the neighbor who dabbles in this and that and shows Ben that he also could make movies not just watch them.

This is definitely a quick and engaging read that will pull you in and make you want to know what happens next.

Final Verdict: Give this one a try. It's a funny, sexy, and emotional book that will definitely keep your attention.