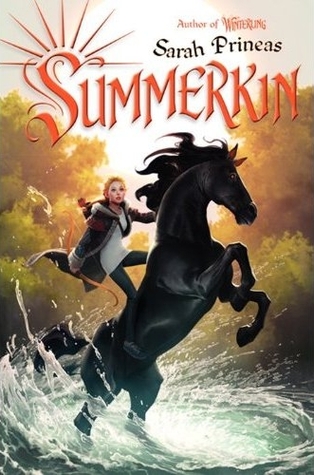 "Down through the Way she fell, feeling the wind and the pressing darkness, the dizzy thump when she landed on the bank. She was through. The air felt softer here, the shadows deeper—and the pull of her connection to the land settled into her bones."

In the Summerlands, time moves slowly, roots grow deeply, and change is not welcomed. But change is needed.

After defeating the wicked Mor and freeing her kin from deadly oaths made to this false ruler, Fer is now the rightful Lady of the land. Yet her people don't know what to make of their new Lady's strange ways, and neither do the High Ones, the rulers of the magical realm, for Fer is an outsider—half human.

To prove herself worthy of the Summerlands crown, Fer is summoned to compete in an epic contest where her strengths and skills will be tested and her loyalties challenged. Can she trust Rook, the puck she calls friend? Can she trust herself? If Fer fails, she will lose her land and the Way will be closed to her forever.

Having not read the previous book, Summerkin was my first introduction to the Summerlands and the character Fer. Even so, I found myself captured by the story and characters right away. Fer has just become the lady of the Summerlands when she is summoned to the High Ones to prove her claim. Rook is a puck that helped her, but he is still a puck and those around her tell Fer not to trust him. Told alternately from Fer and Rook’s perspectively, you get to see the struggle both of them go through as they try to what is right by their nature.

Fer is a stubborn girl and stays true to her good nature, even when fighting to be the Lady of the Summerlands. The competitors that pit their stake in becoming the next ruler are interesting as well. Fer finds there is more to all of them, both good and bad. Arenthiel is the villain of the novel and he has the swarmy icky feel to him that makes you want Fer to kick his butt.

By far, Rook is my favorite character in this book, as he tries to resist his loyalty to Fer that he feels so deeply. Pucks are characters that are only loyal to other pucks, they’re the trickster characters and not to be trusted. I loved reading his point of view and the internal struggles between Fer and the pucks.

Even without reading the first book Winterling, Summerkin proved to be a great novel that was full of adventure and daring. Fer’s strength as a character leads her down the right path, one a true leader should take. I will have to read the first book soon so I can see what brought Fer to the Summerlands.

Final Verdict: Summerkin tells the story of a girl growing into a woman and into her role as a leader. It also shows that our truest nature is not always that which is obvious.