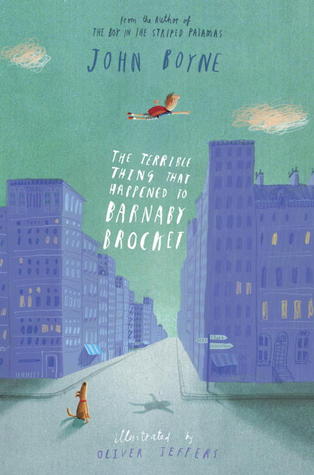 The Terrible Thing That Happened to Barnaby Brocket by John Boyne
Published by Knopf Books on January 8th 2013
Pages: 288
Buy on Amazon
Goodreads

Barnaby Brocket is an ordinary 8-year-old boy in most ways, but he was born different in one important way: he floats. Unlike everyone else, Barnaby does not obey the law of gravity. His parents, who have a horror of being noticed, want desperately for Barnaby to be normal, but he can't help who he is. And when the unthinkable happens, Barnaby finds himself on a journey that takes him all over the world. From Brazil to New York, Canada to Ireland, and even to space, the floating boy meets all sorts of different people—and discovers who he really is along the way.

This whimsical novel will delight middle graders, and make readers of all ages question the meaning of normal.

The Terrible Thing That Happened to Barnaby Brocket was an unexpected read that reminded me of Gaiman's writing. Barnaby Brocket was born into a normal family, whose parents whole life purpose was to be normal their whole lives. Having had two very normal children, they expected the same from their third. Unfortunately, Barnaby was born floating and did not stop. When he was 8, his parents came up with a horrible but well justified idea to let him float away, to bring their family back to normal.

Having been released by his mother into the air, Barnaby Brocket finds himself on an adventure involving a hot air balloon, a trip around the world and finding out who he really is. Beyond floating, he finds that he does not like being normal and even when he gets a chance at becoming such, he finds he must really think about who he wants to be. Above all, I loved that even through his adventures, his mind was always with his family, wanting to make his way home.

The characters Barnaby meets along the way are anything but normal and help him realize what strengths there are in being different from others. It was depressing to see the parents of Barnaby as they deal with the aftermath of losing their son. They have multiple opportunities to make things right on their own, but their absolute need to be normal seems to outweigh what should really be important.

Final Verdict: A touching tale about abandonment and embracing being different, The Terrible Thing That Happened to Barnaby Brocket is a tale that really resonated with me.