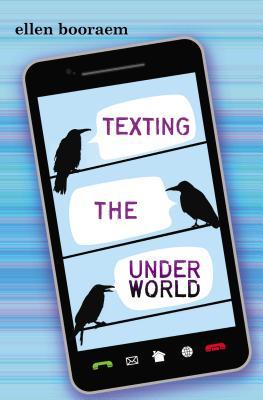 Perpetual scaredy-cat Conor O'Neill has the fright of his life when a banshee girl named Ashling shows up in his bedroom. Ashling is--as all banshees are--a harbinger of death, but she's new at this banshee business, and first she insists on going to middle school. As Conor attempts to hide her identity from his teachers, he realizes he's going to have to pay a visit to the underworld if he wants to keep his family safe.


Discover why Kirkus has called Booraem's work "utterly original American fantasy . . . frequently hysterical." This totally fresh take on the afterlife combines the kid next door appeal of Percy Jackson with the snark of Artemis Fowl and the heart of a true middle grade classic.

Texting the Underworld starts off with the reader meeting Conor, a boy who is afraid of spiders and definitely not seeking out adventure. When a banshee named Ashling shows up in his room, he knows there will be a death in his family. Ashling is there to stay, curious about middle school and may not enjoy her new job as a banshee, but she knows she must go through with it or go crazy. Conor decides to talk to his grandfather about what is going on and he assumes he will be the one that will be called by the banshee. Of course, that is not set in stone and they go to measures to make sure it's not one of the younger family members.

Conor steps up as a character and shows his own courage in the face of danger. I love the relationship that grows between Ashling and Conor as she is more than just a banshee waiting to take a family member away. She has her own memories that she must face with the help of Conor. I love the twist at the end of the book as well, which I won't reveal here. Irish mythology ties this book into an interesting read that strays from the usual paranormal and fantasy elements. The aspect of death is very real and I loved getting a full look at the underworld and the Lady who runs it.

I like when books tackle a different type of mythology and supernatural creatures. Texting the Underworld was a unique book in that aspect, add in the interesting characters and Ashling mysterious background and it was quite a compelling read.

Final Verdict: Texting the Underworld had a great blend of mythology, mystery and adventure. It is a book I would suggest to young readers who love something a bit different from the norm in fantasy.