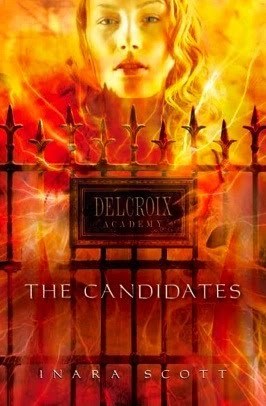 So Dancia does everything possible to avoid getting close to anyone, belieiving this way she can supress her powers and keep them hidden. But when recruiters from the prestigious Delcroix Academy show up in her living room to offer her a full scholarship, Dancia's days of living under the radar may be over. Only, Delcroix is a school for diplomats' kids and child geniuses--not B students with uncontrollable telekinetic tendencies.  So why are they treating Dancia like she's special? Even the hottest guy on campus seems to be going out of his way to make Dancia feel welcome. And then there's her mysterious new friend Jack, who can't stay out of trouble. He suspects something dangerous is going on at the Academy and wants Dancia to help him figure out what.  But Dancia isn't convinced. She hopes that maybe the recruiters know more about her "gift" than they're letting on. Maybe they can help her understand how to use it...But not even Dancia could have imagined what awaits her behind the gates of Delcroix Academy.

Dancia thinks she is a normal teen with a hidden talent. Her main goal in life? To blend in… to never stand out in a crowd… she even has a hilarious two-step policy to avoid making friends. So, when she is "recruited" to the infamous Delcroix Academy, she is shocked. But thing are not as the seem. And this quickly becomes apparent to her that things are not adding up. First, the two of the hottest guys she has ever met… are interested in her. And second, besides her gift, she has no clue as to what the prestigious school wants with her. As Dancia digs deeper into the mysteries, it appears that this school has tons of secrets hidden behind its gates… and she is determined to uncover them.

The Candidates… let's see if I can properly explain how much this novel rocked my socks. From the very first page, I was on a roller coaster. Everything about this novel screams originality and freshness. Yes, it is about superpowers. And yes, they are in a school environment. But none of that matters because Scott presents in a way that is so refreshing. A way that will make you not want to put this book down. Literally.

It is so hard to pinpoint what I loved most about the novel. But if I had to guess, I would probably say the characters… with Dancia and Jack leading the way. It is important to point out that Dancia is a youngish teen at only 14. But I loved that she never felt that way. Not once was I annoyed with her or her actions. Everything just felt right about her character even when I was yelling at her for making a stupid choice. The same can be said about Jack. He is a brilliant character. I fell head over heads for him probably after his second interaction with Dancia. His character is a beautiful spectrum. He can be soft, hard, jaded, or something completely in-between and it all works.

The Candidates is a refreshing and honest look at school life, friendships, and relationships with a twist. This novel honestly blew me away. I literally finished this novel in matter of hours and even then I was like… where is the next book already? Scott has a bright future ahead of her. And I cannot wait to see what she comes up with next. Highly recommended.

9 responses to “Book Review: The Candidates”