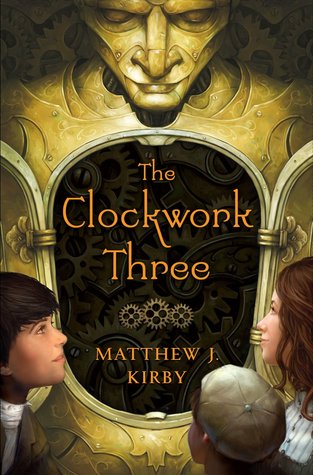 Three ordinary children are brought together by extraordinary events. . . Giuseppe is an orphaned street musician from Italy, who was sold by his uncle to work as a slave for an evil padrone in the U.S. But when a mysterious green violin enters his life he begins to imagine a life of freedom.

Hannah is a soft-hearted, strong-willed girl from the tenements, who supports her family as a hotel maid when tragedy strikes and her father can no longer work. She learns about a hidden treasure, which she knows will save her family -- if she can find it.

And Frederick, the talented and intense clockmaker's apprentice, seeks to learn the truth about his mother while trying to forget the nightmares of the orphanage where she left him. He is determined to build an automaton and enter the clockmakers' guild -- if only he can create a working head.

Together, the three discover they have phenomenal power when they team up as friends, and that they can overcome even the darkest of fears.

This book follows three young people in 19th century America. The first is a street performer named Giuseppe who dreams of returning to Italy, back to his family. Hannah is a maid trying to help her family while her father hopefully recovers from his illness. The last is Frederick, the apprentice of a clockmaker who is trying to complete his own automaton. All of their lives become intertwined and they end up relying on one another to solve their individual problems.

A fantastic story full of adventure, passion, and friendship.

Out of the three, Giuseppe is my favorite character. I love the stories of street performers or thieves that are forced to work by padrones and find a way to get free. The whole book had a Dickens vibe and Giuseppe's story reminded me of my favorite book – Oliver Twist. The other two have their own quirks and strengths and I felt like they made quite an odd assortment of comrades.

Final Verdict: Anyone who likes rags to riches stories, Dickens, or steampunk will enjoy this book.