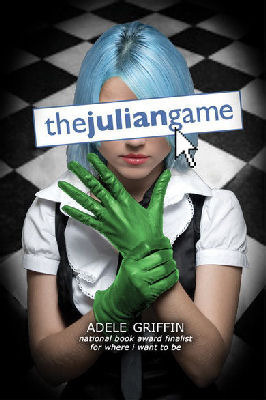 New girl Raye Archer is desperate for a way into the In crowd, so when ice-queen Ella Parker chooses her to get back at her ex, the gorgeous Julian Kilgarry, Raye is more than game. Even if it means creating a fake Facebook identity as “Elizabeth” so that she can learn enough about Julian to sabotage him. While a fun and dangerous thrill at first, what Raye hadn’t counted on was falling for Julian herself—and igniting Ella’s rage.

As Raye works to reconcile the temptress Elizabeth with her real-life self, Ella serves up her own revenge. Now it’s Raye who falls victim, as Ella creates an online smear campaign of nasty rumors and trashy photographs. Suddenly notorious, Raye has to find a way out of the web of deceit that she’s helped to build, and back to the relationships that matter.

Adele Griffin’s riveting novel explores the issues of generation Facebook: the desire to be someone else, real versus online friends, and the pitfalls and fallouts of posting your personal life online for all the world to judge.

Quite an interesting plot – what it involved was a group of cruel popular girls and a new girl who couldn't help but like the attention of their cruel leader even if it meant stooping to an interesting level of evilness. I felt like the plot was really about finding who you really are and really aren't – trying on different personalities to see if they fit. And revenge.. of course.

Raye is great starting out by slowly becomes pulled into Ella's plan to get revenge on her old sweetheart. She loses sight of her normal standards and starts to become gutsy. I'm just glad that she begins to go back to her old self towards the end of the book.

Julian is a major hottie, but I could tell right off – player! But it was really fun to see him interact with Raye.

Final Verdict: I mean this whole book was based off of social networking and how easy it is to become a different person online. Every teen I know has facebook and probably feels a bit more gutsy on there then in real life. Definitely something a lot of people can relate to.