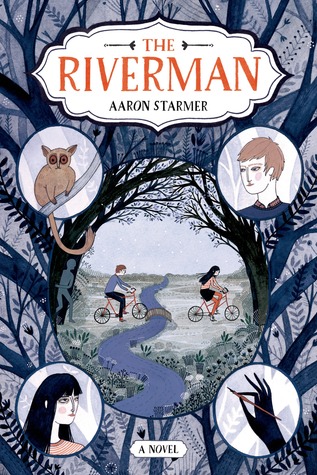 The Riverman by Aaron Starmer
Published by Macmillan on March 18th 2014
Pages: 320
Buy on Amazon
Goodreads

Fiona Loomis is Alice, back from Wonderland. She is Lucy, returned from Narnia. She is Coraline, home from the Other World. She is the girl we read about in storybooks, but here's the difference: She is real.

Twelve-year-old Alistair Cleary is her neighbor in a town where everyone knows each other. One afternoon, Fiona shows up at Alistair's doorstep with a strange proposition. She wants him to write her biography. What begins as an odd vanity project gradually turns into a frightening glimpse into a clearly troubled mind. For Fiona tells Alistair a secret. In her basement there's a gateway and it leads to the magical world of Aquavania, the place where stories are born. In Aquavania, there's a creature called the Riverman and he's stealing the souls of children. Fiona's soul could be next.

The Riverman is one of my most anticipated reads and one that I found myself unable to put down once I picked it up. Alistair’s life changes when Fiona decides that he will be the one to record her biography. Fiona is a strange girl and even stranger still, she begins to tell Alistair about Aquavania and The Riverman. Alistair is so grounded in reality, he thinks Fiona is using this land as a metaphor for the problems in her real life.

Beyond that, Alistair has to deal with his friend Charlie, whose older brother convinces him into lighting fireworks and he loses some of his fingers. Charlie uses his loss to keep Alistair as a friend, who seems to have outgrown their friendship but keeps him enraveled in playing video games now that Charlie cannot. I think beyond the magic and darkness in the book is showing a boy who is growing up. It’s more Alistair’s story than it is Fiona’s, although she drives Alistair’s plot and life in a different direction than he could have imagined.

I think what threw me about this book as that it really isn’t a middle grade book, it’s more upper middle grade or YA. It’s about first loves, betrayal, and the darkness of becoming a teenager. There’s some moments in the book that really widened my eyes and scared me more than I thought they would. I honestly thought this would be a book like Narnia, where this Aquavania would play a larger role, that it would be a new world to explore and an adventure to have.

Instead, The Riverman is a book about the loss of innocence and growing up. It has a dark edge to it that I enjoyed immensely, but would wisely recommend for older readers than I first thought the book was pegged for.

2 responses to “Book Review: The Riverman”