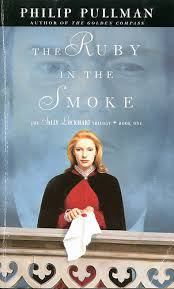 The Ruby in the Smoke by Philip Pullman
Series: Sally Lockhart #1
Published by Random House Children's Books on 1985
Pages: 230
Buy on Amazon
Goodreads

Sally is sixteen and uncommonly pretty. Her knowledge of English literature, French, history, art and music is non-existent, but she has a thorough grounding in military tactics, can run a business, ride like a Cossack and shoot straight with a pistol.


When her dear father is drowned in suspicious circumstances in the South China Sea, Sally is left to fend for herself, an orphan and alone in the smoky fog of Victorian London. Though she doesn't know it, Sally is already in terrible danger. Soon the mystery and the danger will deepen - and at the rotten heart of it all lies the deadly secret of the ruby in the smoke...

I remember this trilogy being my favorite in middle school and I seemed to have misplaced the first one. So I hunted down this copy about a year ago for when I longed to reread these marvelous mysteries. Sally is one of the strongest female characters in literature. During a time when women were only meant to do housework and be married off, Sally finds herself hunting down the truth behind her father's mysterious death. On the way, she also finds herself becoming a manager of a photography business, living on her own and deciding what her own life will become.

The first in a trilogy, we are introduced to Sally's character and the mystery she is about to begin solving. London is a dangerous place and Sally owns a small pistol to protect herself. In fact, I love the way the book starts by introducing Sally and her intentions:

On a cold, fretful afternoon in early October, 1872, a hansom cab drew up outside the offices of Lockhart and Selby, Shipping Agents, in the financial heart of London, and a young girl got out and paid the driver.

She was a person of sixteen or so – alone, and uncommonly pretty. She was slender and pale, and dressed in mourning, with a black bonnet under which she tucked back a straying twist of blond hair that the wind had teased loose. She had unusually dark brown eyes for one so fair. Her name was Sally Lockhart; and within fifteen minutes, she was going to kill a man.

Sally proceeds to do such that, but in a surprising manner indeed. I truly love this book for the characters, the plot and the setting. I've always been fascinated with London in the late 1800s and this book introduces us to that world precisely and without scruples. I love the accents used within the dialogue, which really adds to the setting of the novel.

Final Verdict: This is a trilogy that I highly reccomend to those who love historical fiction, mysteries and strong female characters. Whether it is one of those or all three, you should read these books.

*Leave a comment to get an extra entry in the Philip Pullman giveaway for May's readalong. Details are here.

2 responses to “Book Review: The Ruby in the Smoke”