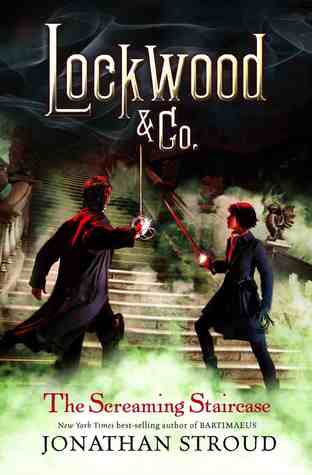 For more than fifty years, the country has been affected by a horrifying epidemic of ghosts. A number of Psychic Investigations Agencies have sprung up to destroy the dangerous apparitions.

Lucy Carlyle, a talented young agent, arrives in London hoping for a notable career. Instead she finds herself joining the smallest, most ramshackle agency in the city, run by the charismatic Anthony Lockwood. When one of their cases goes horribly wrong, Lockwood & Co. have one last chance of redemption. Unfortunately this involves spending the night in one of the most haunted houses in England, and trying to escape alive.

Set in a city stalked by spectres, The Screaming Staircase is the first in a chilling new series full of suspense, humour and truly terrifying ghosts. Your nights will never be the same again . . .

The Screaming Staircase caught my eye months ago when I saw it on Netgalley and was happy to find the time to sit and read on my Kindle for once. I tend towards physical books still but was dying to read this one. The beginning of The Screaming Staircase puts the reader right into the thick of the story, where Lucy and Anthony are currently trying not to get themselves killed by a ghost while missing some very important equipment. I was drawn in from the first page and couldn't wait for the world building, something that did not disappoint.

Set in an alternate England, ghosts are everywhere at night, so a strict curfew is put on all citizens so they will not be killed and become a part of the ghost plague. Only children start out with sensitivity to ghosts, so they quickly become trained and part of the investigative teams that deal with ghosts, both deadly and some less harmful. When Lucy showed signs of hearing ghosts at a young age, she began her training early and it was her wages that helped her family the most. One horrible evening, Lucy's team is all killed, leaving Lucy and their adult leader the only ones left alive. Being from the country, she decides to leave and finds herself in London, exploring her options.

Striking out, she finds herself being tested by a strange boy named Anthony Lockwood and his somewhat annoying sidekick George on the interview. She passes the test and finds herself a part of the odd team of Lockwood & Co., not her first choice or even third choice, but it is a job. Lockwood has a bit of a Sherlock feel to him at times, he has that air of mystery and the odd behaviors. I really enjoyed his interactions with Lucy and George throughout the book, along with really any one he met.

Lucy herself is torn up inside because of her previous experiences and the worry that her skills are not strong enough to cut it. She also has a lot of anger inside of her, which seems to come out the most around George. I love George, who is the somewhat annoying yet strangely endearing character who loves food and research of all things. Unlike Lockwood and Lucy, he does not charge into situations unprepared, although he definitely shows his courage throughout the book.

I cannot talk about The Screaming Staircase without addressing the horrific moments within this story. It was often scarier than a horror movie and I felt Lucy's fear, especially when encountering the Red Room, a thing of nightmares. If I were in the shoes of Lockwood & Co. I would have been peeing my pants at many moments in the book and applaud the author for scaring me so well.

Final Verdict: A mix of horror and adventure, The Screaming Staircase is the first in a series that I cannot wait to read more of. If you enjoy adventureful ghost stories, TV shows like Supernatural or really anything scary at all, read this book!

One response to “Book Review: The Screaming Staircase”