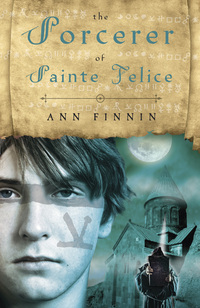 I was only an apprentice. I swear it. By all the angels in Heaven.

Fourteen-year-old Michael de Lorraine has been condemned to death by the Holy Office for sorcery. But just as the flames threaten to consume him, Michael is saved by Abbot Francis and granted refuge at the Benedictine monastery of Sainte Felice. Michael learns that this strange and wonderful place, famous for its healing wine, harbors renegade monk-sorcerers, enchanted gargoyles, and a closely guarded secret: Abbot Francis is the great Seratois, exiled Grand Master of the Fratres Illuminati.

As the church intensifies its cruel efforts at justice, Abbot Francis and the brotherhood are in grave danger. Michael will do anything to protect his mentor, but are his powers great enough to save the monastery from the merciless, bloodthirsty Inquisition?

Blending together magic, miracles, and historical details of life in fifteenth-century France, this unique fantasy offers a vibrant portrayal of one boy's journey of faith.

When Michael is saved from being burned at the stake, he must decide whether or not he wishes to join in the service of God. Abbot Francis and the brothers are part of an abnormal abbey – where sorcery is taught and used with good intention to help the people. Michael must make a choice on whether he wishes to use sorcery for the glory of God, or for the glory of his own want. A fantastic tale of magic and spirituality in a time period not often explored.

Michael is a great male character, he has some growing to do but I just love how he turns out during the book. He starts a bit cocky and then realizes that the spirituality around him is infectious and life-changing. Abbot Francis is another great character and really ends up the epitome of a reformed man.

Final Verdict: I think this will be a great book for guys. It's refreshingly female-less in major characters and it's interesting to see inside what it is like to live in a monastery and still practice sorcery.

10 responses to “Book Review: The Sorcerer of Sainte Felice”