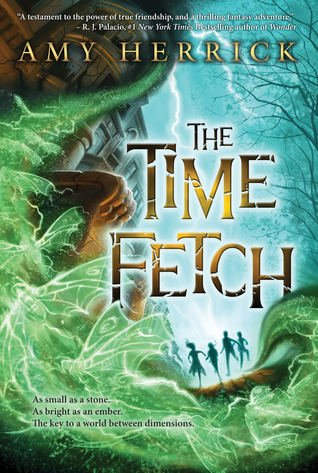 Edward picks up what he thinks is a rock. He doesn’t know it is a sleeping Time Fetch—and touching it will release its foragers too soon and alter the entire fabric of time and space. Soon the bell rings to end class just as it has begun. Buses race down streets, too far behind schedule to stop for passengers. Buildings and sidewalks begin to disappear as the whole fabric of the universe starts to unravel. To try to stop the foragers, Edward must depend on the help of his classmates Feenix, Danton, and Brigit—whether he likes it or not. They all have touched the Fetch, and it has drawn them together in a strange and thrilling adventure. The boundaries between worlds and dimensions are blurred, and places and creatures on the other side are much like the ones they’ve always known—but slightly twisted, a little darker, and much more dangerous.

A fast-paced tale filled with mythology, danger, friendship, and a shocking centuries-old secret, The Time Fetch is sure to delight fans of fantasy adventure with its tale of ordinary kids who tumble into a magical situation.

The Time Fetch is a book that took a while for me to get into. I found the idea of a fetch intriguing at the start of the book and then we return to modern day to follow a group of middle or high school students. Edward is the first, who is the one who ultimately dislodges the fetch, bringing it to school, thinking it is an ordinary rock for a project in science. He’s a geek boy who wants nothing more to become invisible and just blend in. Unfortunately his neighbor Feenix seems to have different ideas, he tries his best to dodge her, but she seems out to get him.

Feenix is your mean girl leader, who takes special delight in making Edward’s life a bit miserable. Not enough to get into trouble, but enough to entertain herself during school hours. She has two minions that follow her around, complimenting her and being her best friends through it all. I found her first couple of chapters driving me nuts, I didn’t like her voice and knew she had a lot of growing to do in this book.

Danton is the boy that everyone wants for a friend and suddenly Edward finds him constantly hanging around him, trying to engage him in conversation when all he wants to do is disappear. He’s naturally good at sports, generally good looking and a nice guy. He comes off as a bit too good at times, without flaw except for maybe a couple moments of cluelessness. He’s the character that prompts them to gather as a group and push on during lulls in the plot.

Brigit is my favorite character, being a timid, mute girl who blushes furiously whenever anyone pays her the slightest attention. I loved her back story and the role she played in the story. I loved seeing her become more comfortable with the rest of the group and enjoyed scenes in the book more when she was involved.

Unfortunately, I felt like the book moved too slow at the beginning and had some confusing moments. I felt it was a little disjointed at times and the book didn’t pick up until about halfway through when Feenix vanishes. Probably one of my favorite times was seeing her tortured by these three witches, who reminded me of the Fates or the three Witches that often appear in fantasy stories. It was time for Feenix to have some learning moments and I appreciated how she changed during the story.

Once more of the fantastical elements and the journey began for the group, I felt engaged and enjoyed meeting the Unraveller – the villain of the story, and watching his role in the story. Other than than, my biggest complaint is the lead up felt really stilted and the characters were a little over the top. I loved the idea and concept along with the further plot points.

A fantasy novel about a group of students saving the world, not a great read but fairly entertaining.

One winner will win a paperback copy of The Time Fetch.