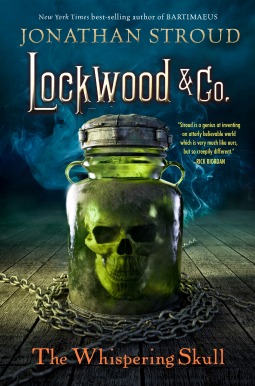 In the six months since Anthony, Lucy, and George survived a night in the most haunted house in England, Lockwood & Co. hasn't made much progress. Quill Kipps and his team of Fittes agents keep swooping in on Lockwood's investigations. Finally, in a fit of anger, Anthony challenges his rival to a contest: the next time the two agencies compete on a job, the losing side will have to admit defeat in the Times newspaper.

Things look up when a new client, Mr. Saunders, hires Lockwood & Co. to be present at the excavation of Edmund Bickerstaff, a Victorian doctor who reportedly tried to communicate with the dead. Saunders needs the coffin sealed with silver to prevent any supernatural trouble. All goes well-until George's curiosity attracts a horrible phantom.

Back home at Portland Row, Lockwood accuses George of making too many careless mistakes. Lucy is distracted by urgent whispers coming from the skull in the ghost jar. Then the team is summoned to DEPRAC headquarters. Kipps is there too, much to Lockwood's annoyance. Bickerstaff's coffin was raided and a strange glass object buried with the corpse has vanished. Inspector Barnes believes the relic to be highly dangerous, and he wants it found.

The author of the blockbuster Bartimaeus series delivers another amusing, chilling, and ingeniously plotted entry in the critically acclaimed Lockwood & Co. series.

The Whispering Skull was a book I had been anticipating since I read the first book in the series last year. Following Lucy, George and Lockwood on their adventures, this book jumps right into the action that I loved of the last book. This time, George’s lack of research puts them in a bit of a spot and they find their nemesis Fittes agents on the scene and basically save them. A wager takes place later in the book as both teams are hired to investigate missing artifacts from a graveyard and I love seeing that light a fire under Lockwood & Company. There’s just as much danger in this book as the last, although again I found the most frightening scenes towards the end of the book. I love the build up that it takes throughout the novel to reach such a peak at the end. I’m not always one for scary stories, but this series has just the right amount of it to get my blood chilling.

Probably the best part of the book was the ghost attached to the skull in the jar. It reminded me a bit of the Dresden Files and his talking skull. Of course, it only talks to Lucy, who has the ability to hear ghosts, and only when the boys are away from her. I liked the way the skull tested everyone’s patience, it made for some humorous situations as they each became more frustrated. The skull plays quite the roll in this story, even going so far as leading up to the big reveal at the end of the book. Which let me tell you, it’s quite an epic moment and one I constantly think about. I’m already dying for the next book…

This series has everything I could want in a middle grade series. Great characters, a thick plot full of turns and action orientated scenes, and a setting that I love – a historical London ridden with a ghost problem. Most of all, I’m intrigued by Lockwood and his mysterious ways, I feel Lucy’s pain in not knowing enough about him but feeling compelled to want to learn more. There’s so many great humorous moments scattered in the story as well that just wraps everything up together. If you haven’t read Stroud’s books before I highly suggest them, especially this series.

A strong follow up to a series that has everything I could ever want in it. Definitely read these books, you will not regret it.