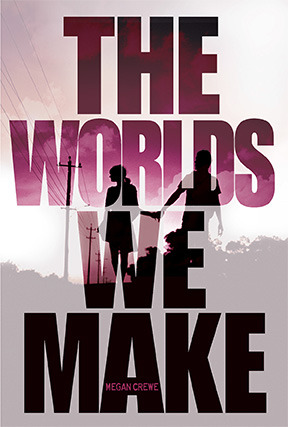 When Kaelyn and her friends reached Toronto with a vaccine for the virus that has ravaged the population, they thought their journey was over—but hope has eluded them once again. Now there is a dangerous group of survivors intent on tracking them down and stealing the cure no matter the costs.

Forced onto the road again, Kaelyn redoubles her efforts to find a safe haven. But when the rest of her group starts to fall apart, the chances for her success grow slim. Kaelyn's resolve is strong, but is she willing to surrender everything in order to stay alive? Riveting action and characters full of conviction and courage will captivate readers in this final installment in the Fallen World trilogy.

The Worlds We Make is the final book in the Fallen World trilogy and had as much action and twists and turns as the previous two books. Kaelyn faces more devastation as her group becomes smaller throughout the book. Being chased by the Wardens, she has to make a decision on how to keep their group safe, and she struggles with being a leader, especially when she feels responsible for those they have lost. Still on the road to get to the CDC, she must find a way safely without alerting the Wardens.

As she talks more and more with the CDC woman on the other end of her radio, she realizes that she may be wrong to take the samples there. Kaelyn must figure out a way for the virus to be used so that everyone can be saved indiscriminately. Without a solid government, she finds that she may have to trust the Wardens to a certain point, even if she doesn’t like it.

Kaelyn is a solid character and I like that she keeps morality first, even when faced with adversity. I didn’t really like the relationship aspect in this book, as she fights internally with her feelings and I felt at times it felt a little distracting from the driving force of a plot to save the world. I loved the insight into the head of the Wardens, who was an interesting character and who I would liken to the Governor from the Walking Dead series.

I felt like I lost some of my favorite characters in this last installment, ones I thought would have lasted to the end. Overall, I really enjoyed this series but wish it had consistently been told in letters, I really enjoyed the first book’s format. As they travel, I see how that could be a harder feat to pull of writing. Fallen World is definitely a series to look out for when it comes to survival stories.