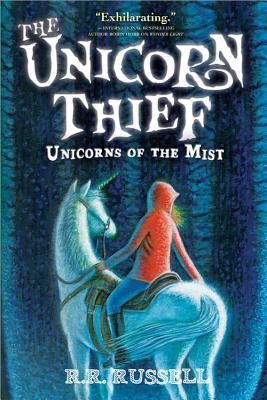 The Unicorn Thief by R. R. Russell
Series: Unicorns of the Mist #2
Published by Sourcebooks, Incorporated on May 1st 2014
Pages: 256
Buy on Amazon
Goodreads

Twig and Ben are hard at work taming the last free unicorn heard on Lonehorn Island when Ben's loyal unicorn, Indy, disappears. When their search leads them to the island's secret passageway of Terracornus, the land of unicorns, they discover a bold thief at work. There Twig learns the tangled truth about Ben and the evil Queen who's enslaved all of the unicorns. Now all of the captive unicorns are in danger and only Ben and Twig, the last unicorn riders, can save them.

The Unicorn Thief takes place almost directly after the first book in the Unicorns of the Mist series. When Ben’s unicorn Indy goes missing, Twig and Ben must venture into Terracormus, where he doesn’t want to face the queen. They track Indy to the Death Swamp, but Ben knows they cannot traverse it without help. He decides they must go to the castle and steal a map to help them. While Twig is unsettled by the thought of stealing, she goes with Ben and finds out the truth behind his past and why he hates the queen so.

I was anticipating a bit more of dread when meeting the queen, but she has her own reasons for not hurting the pair, although she says she will not allow them back to Lonehorn Island. With an impending treaty between Eastland and Westland, Ben finds himself agreeing to a duel of the Boy King so that war will not begin between the two. But he cannot fight if he cannot escape the queen. With outside help, the pair make it back to Lonehorn Island to prepare, but their plan is revealed to the Murleys who don’t want to risk Twig and Ben’s life.

I really enjoyed the second book and how it took the reader deeper into Terracormus, a land I was hoping we would get to explore as the series moved on. That being said, I felt like the transitions between the two lands were very startling. A chapter would end in one and then they would be back at the other. It threw me a couple of times when I was reading and realized that he pair was no longer where they were previously. Even with its flaws, I loved meeting the new characters in The Unicorn Thief and seeing Twig and Ben continue to grow as herders and friends.

An exciting adventure with dueling unicorns, a Death Swamp, and secrets revealed.