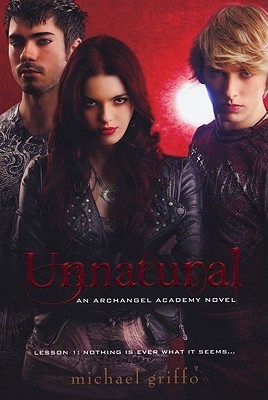 I am a sucker for boarding school novels. Still have not figured out why, so it is what it is. Unnatural immedately grabbed my attention because this setting.. then when I found out there was a possibility for a M/M YA romance, I just knew that I had to give it a try.

First off, I have to give Michael Griffo some credit. He is working with a creature that has been used to death. At this stage in my reading career, if I never have to put up another vampire book, I would probably be estatic. (Vampire series I am currently obsessed with aside.) But Griffo decided to go with using this character, and for the most part, I was pleased with the result.

Michael Howard views himself as apart from every one in his small town. He is lonely.. trapped.. you get the point. And so does the reader, after hearing about Michael's issues for a longer than needed time frame. Now, don't get me wrong. Whiny characters can be fun characters. But in Unnatural's case, I felt like I needed more than to constantly hear about the same issues over and over again. Thankfully, Michael began to grow on me once he got to Archangel Academy.

Unnatural may not be my favourite vampire novel of all time. But it definitely was creative. I loved that Griffo took a few risks in combining vampire lores that I have seen a few other places, and made it completely his. The novel, overall, felt like it took forever to read since Griffo includes more than enough details to fully grasp his vampire world. Alhough, it I would not have hurt my feelings any if some of the more redunant details had been left out. Overall, I will be looking forward to more from Griffo and waiting to see how this series evolves.

One response to “Book Review: Unnatural”