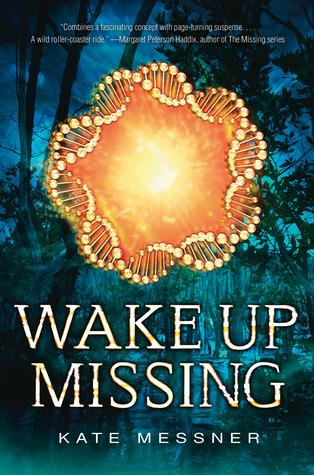 The four have nothing in common except for the head injuries that land them in an elite brain-science center in the Florida Everglades. It’s known as the best in the world, but as days pass, the kids begin to suspect that they are subjects in an experiment that goes far beyond treating concussions….and threatens their very identities. They’ll have to overcome their injuries – and their differences – to escape, or risk losing themselves forever.

In Wake Up Missing, Cat has not been the same since her concussion after falling off a tree house bird watching. When she gets the chance to go through a program that will help her get back to who she used to be, she reluctantly agrees to be parted from her family. What she finds is the others there for the same process have exactly the same recovering injury and there seems to be something more going on. Two of the other patients she has never met, but she overhears the doctors talking one day about a tumor and not letting the parents know.

If she wasn't suspicious before, Cat decides it's time to find out the truth about what is really happening. Will she learn the truth before she becomes something else? I really enjoyed Wake Up Missing. Cat is an interesting character and it reminds me of some of the problems I encountered when having a concussion in high school. All of the characters had something that set them apart from the others.

I love the twists Wake Up Missing added, giving it science fiction elements that I did not see coming. I enjoyed the suspense and the chase towards the middle of the book as Cat tries to do the right thing. The setting in Florida also lent itself to an intriguing adventure, as the swamp holds it own types of danger and interesting characters, both helpful and harmful.

Final Verdict: Wake Up Missing is a book that is relatable and full of action and suspense.