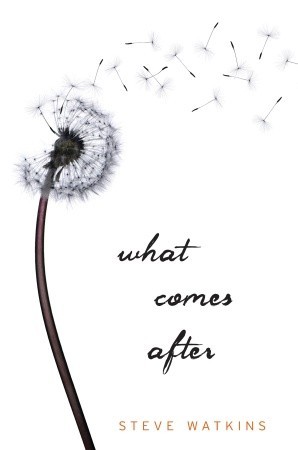 What Comes After by Steve Watkins
Published by Candlewick Press on April 12th 2011
Pages: 334
Goodreads

A gripping portrait of a teen’s struggles through grief and abuse - and the miraculous power of animals to heal us.

After her veterinarian dad dies, sixteen-year-old Iris Wight must leave her beloved Maine to live on a North Carolina farm with her hardbitten aunt and a cousin she barely knows. Iris, a vegetarian and animal lover, immediately clashes with Aunt Sue, who mistreats the livestock, spends Iris’s small inheritance, and thinks nothing of striking Iris for the smallest offense. Things come to a head when Iris sets two young goats free to save them from slaughter, and an enraged Aunt Sue orders her brutish son, Book, to beat Iris senseless - a horrific act that lands Book and his mother in jail. Sent to live with an offbeat foster family and their "dooking" ferrets, Iris must find a way to take care of the animals back at the farm, even if it means confronting Aunt Sue. Powerful and deeply moving, this compelling novel affirms the redemptive power of animals and the resilience of the human spirit.

I really thought this one sounded good, despite it not being my favorite genre and decided to give it a try.

This book is a mix of emotions. Iris goes through a lot, she loses her dad, the friend she was staying with forces her to leave because her parents were fighting, and then she has to deal with an abrasive aunt who turns out to be more abusive than Iris first thought. I have to say, the way she coped was very realistic, she turned to what she knew she loved – animals, and used them to keep going.

I can't imagine being in her shoes, but I feel like Iris was a very realistic character. The way she reacted to things really pulled her character together and made her so concrete. I thought the villain of the story – Aunt Sue – is probably one of the most realistic villians I've encountered as well. She's not over the top violent, but she takes deep offense when Iris does anything against her and she finds a way to make her miserable. Aunt Sue abuses Iris physically and mentally and you hate her for it, but you get this glimpse of how sorry a life she's lived behind all that anger.

It's hard not to relate to one of the many themes in the book – moving away, trying to fit in, abuse, loss of a parent, and the love of animals.

7 responses to “Book Review: What Comes After”