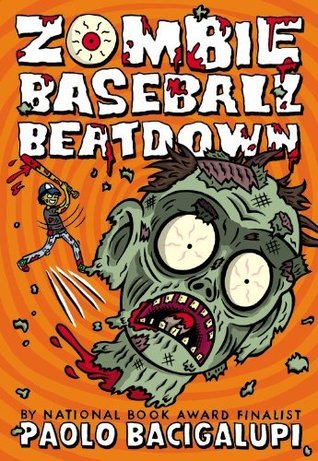 The apocalypse begins on the day Rabi, Miguel and Joe are practicing baseball near their town's local meatpacking plant and nearly get knocked out by a really big stink. Little do they know the plant's toxic cattle feed is turning cows into flesh-craving monsters...ZOMBIES!!!

The boys decide to launch a stealth investigation into the plant's dangerous practices, unknowingly discovering a greedy corporation's plot to look the other way as tainted meat is sold to thousands all over the country. With no grownups left they can trust, Rabi and his friends will have to grab their bats to protect themselves (and a few of their enemies) if they want to stay alive...and maybe even save the world.

In this inventive, fast-paced novel that strikes a pitch-perfect tone for reluctant readers, National Book Award finalist and Printz Award-winning author Paolo Bacigalupi effectively uses humour and high-intensity action to take on hard-hitting themes - from food safety to racism and immigration - and creates a zany, grand-slam adventure that will get kids thinking about where their food comes from.

Zombie Baseball Beatdown is one of those books you think will be silly, gross and the perfect book for middle grade boys. All of this is true, but there is so much more to the story and characters than just a horrific zombie story. Rabi is our main character, being an Indian American, he faces some bullying from a boy on his baseball team. When his mother has to leave to go to the funeral of a relative, he convinces her to leave him behind to stay with his friend Miguel.

An unfortunate factory accident leaves a stinky smell (literally) as well as Miguel's aunt and uncle being deported, leaving the two boys pretty much without adult supervision. With the help of their friend Joe, they soon find themselves not only dealing with missing family but zombies. The fact that they all play baseball helps the boys as they travel around, trying to figure out how to let the police know about the zombie problem.

Nothing is ever that simple, and a lawyer even steps in to convince the boys to drop their mission for letting the world know about the zombies, and there's even a zombie cow. I thought that was an interesting twist to the story, but the boys don't stop there. I thought this was a fun zombie book but with added deeper issues ingrained into the story. The boys had their own characteristics supported by backgrounds and I loved seeing such a diverse set of friends in middle grade literature.

Final Verdict: While hitting all of the gorey zombie details, Zombie Baseball Beatdown goes beyond a zombie story and delves into issues of race, friendship and bullying.