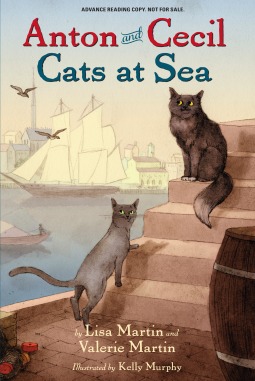 A swashbuckling story of two very different cat brothers and their adventures at sea.

Cat brothers Cecil and Anton are as different as port and starboard. Cecil, stocky and black with white patches, thirsts for seafaring adventure as he roams the docks of his harborside home, taking day trips on fishing boats when the chance comes along. Slim, gray Anton prefers listening to the sailors’ shanties at the town saloon, venturing to port only for the day’s catch. But one day when Anton goes in search of fresh mackerel, he’s stolen off the dock, and the next thing he knows, he’s at sea.

Knowing little of the wide open ocean that lies beyond the harbor, Cecil boards another ship in hopes of finding Anton. But what begins as a rescue mission turns into a pair of high seas adventures, with thrills and danger bubbling under every wave.

Anton takes on a fierce rat, outwits hungry birds, and forges a forbidden friendship, while Cecil encounters dolphins and whales and finds himself in the middle of a pirate raid. On an ocean as vast as the one Anton and Cecil have discovered, will they see home—or each other—ever again?

Orange Prize−winning author Valerie Martin’s and Lisa Martin’s colorful cast of characters, rich historical detail, and lyrical storytelling will delight fans of such classic animal adventures as The Wind in the Willows, Stuart Little, and Poppy.

Short & Sweet: Anton and Cecil are two very different cats, they are brothers, but one craves adventure while the other prefers to hear stories of said adventures. When the two brothers find themselves at sea, they work to become reunited again through a series of adventures with mystical elements of an eye in the sky. As a fan of any adventures on the sea, I enjoyed this historical and fantastical story, which was a quick and fun read.

Final Verdict: Full of adventures and fun characters, Anton and Cecil Cats at Sea was a quick and easy read that children will enjoy.

One response to “Book View: Anton and Cecil: Cats at Sea”