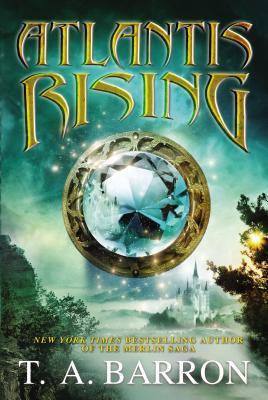 From T.A. Barron, the New York Times bestselling author of the Merlin Saga, comes a new fantasy world about the origins of Atlantis, perfect for fans of The Lord of the Rings, Eragon, The Beyonders and Percy Jackson and the Olympians.

In a magical land called Ellegandia, a young boy named Promi scrapes by, stealing pies, cakes and sweets to survive. But little does he know that his country is a pawn in an ages-old war between good and evil, battled both in the spirit realm and in the human world. Harboring secrets of his own, Promi teams up with a courageous girl named Atlanta and the two vow to save their land—and each other—no matter the cost. But their vow has greater repercussions than they ever could imagine—in fact, it may just bring about the creation of Atlantis, an island cut off from the rest of the world, where magic reigns supreme.

With his trademark action, adventure, and poignancy,master of fantasy, T.A. Barron explores a new mythology—the origin of the legendary isle of Atlantis. This book is perfect for fans of Rick Riordan, Brandon Mull, Christopher Paolini and, of course, T. A. Barron’s Merlin Saga.

Short & Sweet: I loved T.A. Barron's books growing up so I was excited when I picked up Atlantis Rising from the library. Promi is a thief, who loves to swipe sweets especially from the markets and has made it his goal to steal directly from the high priest himself. Atlanta is a girl who lives in the forest and takes care of the trees. They are thrown together when the hunt for Atlantis by a greedy evil villain has Promi working towards a goal of stopping inevitable evil. I'll be honest, the characters and plot both fell flat for me. Atlanta was a bit of an airy character who seemed to lack depth and Promi is lacking some character development as well. At some point, he has to give up something he loves in order to use magic and usually this means something in the way of food. I really wanted to enjoy this one, but ended up feeling like it dragged til the end.

Final Verdict: An interesting twist on Atlantis, but Atlantis Rising fell flat a bit for me when it came to the characters. I would recommend it to readers who love fantasy and adventure books.