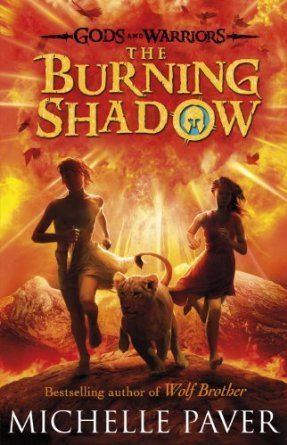 The Burning Shadow by Michelle Paver
Series: Gods and Warriors #2
Published by Penguin Group US on January 16th 2014
Pages: 304
Buy on Amazon
Goodreads

While searching for his kidnapped sister, Outsider Hylas takes a dangerous detour when he’s captured as a slave and sent to the copper mines of Thalakrea. Hylas faces brutal overseers and lethal cave-ins while evading his enemies, the Crows. With the aid of an orphaned lion cub and his friend Pirra, Hylas must escape the mines and shatter the power of the Crows for good. But the prophecy is still at work and Hylas cannot escape its grasp, especially when the anger of the oldest god is awakened.

Having loved Gods and Warriors, I could not wait to get my hands on The Burning Shadow. Only, I forgot it came out until I came across it at the library in the new section and snatched it into my hands. Our three main characters have separated, but end up convening again in an unlikely twist of fate on an island where the Crows rule. Hylas is the first to arrive, becoming enslaved and forced to work in mines where shadows seems to lurk and he finds a companion in a lion cub whose family was killed by the Crows. Pirra runs from home and her fate to be married off, only to find herself headed in a different direction than she wanted to be lead. Telamon is the troubled of the three, a crow and seeming to be going down a path of darkness despite his caring for Hylas’ fate. I loved the various view points and the way that Paver dives into a world full of mythical creatures and gods, while still having such deep and conflicted characters.

A fantastic sequel to a series you cannot miss, one that will transport you to a world of danger and mythical beings.

One response to “Book View: The Burning Shadow”