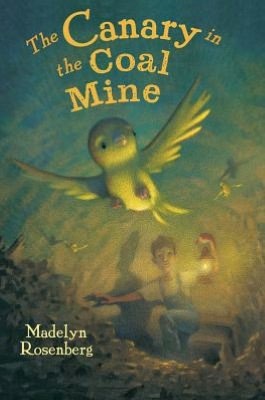 Canary in the Coalmine by Madelyn Rosenberg
Published by Holiday House on April 1st 2013
Pages: 144
Buy on Amazon
Goodreads

Tired of his twelve-hour shifts and facing danger daily, Bitty, a canary whose courage more than makes up for his small size, treks to the state capital to try to improve working conditions in coal mines.

Short & Sweet: Canary in the Coal Mine is a fantasy story set in the 1930s about the canaries that were used in coal mines to detect gas leaks. Bitty is a canary whose family has always worked in the coal mines, helping miners know if there is a gas leak in the mine. However, Bitty dreams of something more for his life than one day ending up deal in a mine. In order to help his family and friends, he must appeal to the government to stop using them. Bitty lucks out and finds an inventor who is creating a machine that does the same job they do. Now if only he could speak to the humans. I loved the use of history with fantasy to convey a time period most readers would otherwise find uninteresting.

Final Verdict: Canary in the Coal Mine is a short and quick read that will expose readers to the 1930s while having an adventure and fantasy filled novel about talking canaries. Recommended for elementary readers or as a readaloud.