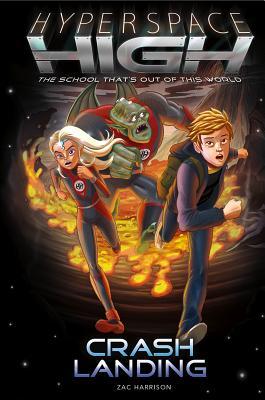 When John Riley gets on the wrong train, he ends up at an elite academy on an enormous space ship, where his classmates are aliens, the food is disgusting, and the penalty for failing exams is harsh. Can he show that he deserves a place at Hyperspace High?

Short & Sweet: The first in a series, Crash Landing starts with John, a human boy who gets on the wrong bus and is sent to Hyperspace High. Finding himself the only human in the intergalactic school, he finds some allies and friends right away, but also makes some enemies. The problem at hand is how he will get back home, something that cannot happen for a time due to the way the spaceship is traveling. What he finds is that he likes how he fits into the school and by the time it is time to go back to Earth, he finds himself wanting to stay, but will they let him?

Final Verdict: Crash Landing is a fun new space adventure series that many readers will enjoy.