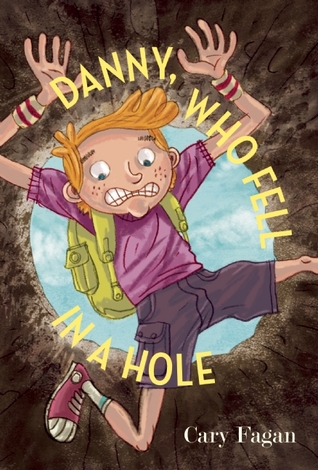 Danny Who Fell in a Hole by Cary Fagan
Published by Groundwood Books on March 26th 2013
Pages: 96
Buy on Amazon
Goodreads

Danny’s parents have always been a bit flaky, but this time they have gone too far! Their latest plan to follow their dreams means Danny and his older brother will spend six months in Banff (wherever that is) and six months in New York City. Furious, Danny runs out of the house and straight into a very, very large hole. When it appears that help is not on the way, Danny becomes a subterranean Robinson Crusoe, creating shelter (garbage bag and paper clips), cereal (coffee creamer, rainwater, granola bars, and a few rogue raisins), and a washroom (a hole in a hole). His Man Friday has a long, earth-covered snout, a taste for beetles, and no eyes to speak of. Oh, and he also talks. His name is Mole, and he is excellent company — until a snake appears, and Danny must save his new friend.

Short & Sweet: When Danny finds out his family is going to split up and move to fulfill their dreams, he is upset. So upset, he decides he needs to take a run to get his emotions out. Unfortunately, he finds himself on a construction site and falls into a hole, one he cannot climb out of. Finding that he may be stuck, the only company that comes and visits is a talking mole, who helps him realize his life might be as bad as he thought.

Final Verdict: Danny Who Fell in a Hole is a short and quick story that makes you think about what is important in life.

3 responses to “Book View: Danny Who Fell in a Hole”