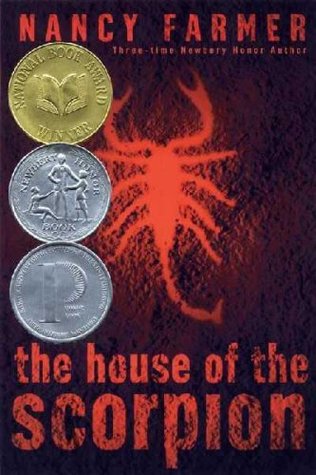 The House of the Scorpion by Nancy Farmer
Series: Matteo Alacran #1
Published by Simon and Schuster on 2002
Pages: 400
Goodreads

Matt is six years old when he discovers that he is different from other children and other people. To most, Matt isn't considered a boy at all, but a beast, dirty and disgusting. But to El Patron, lord of a country called Opium, Matt is the guarantee of eternal life. El Patron loves Matt as he loves himself - for Matt is himself. They share the exact same DNA.

As Matt struggles to understand his existence and what that existence truly means, he is threatened by a host of sinister and manipulating characters, from El Patron's power-hungry family to the brain-deadened eejits and mindless slaves that toil Opium's poppy fields. Surrounded by a dangerous army of bodyguards, escape is the only chance Matt has to survive. But even escape is no guarantee of freedom… because Matt is marked by his difference in ways that he doesn't even suspect.

The House of the Scorpion has been on my to-read list for a long time, an author I knew was good but just had not gotten around to reading yet. The story did not disappoint, full of intrigue and a hero with a somewhat confused past, mistreatment and the pull inside of himself to be either evil or good. Farmer builds a world where clones are harvested and used as slaves or to replace body parts. Most of them have a surgery that limits their brain power and makes them easy to control. Matteo is one of the few that has his own intelligence, but for what reason, he is not sure. He is the clone of El Patron, the man who rules the world of Opium and has privileges that no other clone has, yet he is still not treated like other humans and he soon learns of his real reason for existence. This leads him outside of the home he has known all his life to new adventures. I’m excited to learn there is now a sequel as I really would love to see what happens to Matteo next.

A unique twist of a dystopian novel, involving the drug trade and clones in a way I have never read before.

One response to “Book View: The House of the Scorpion”