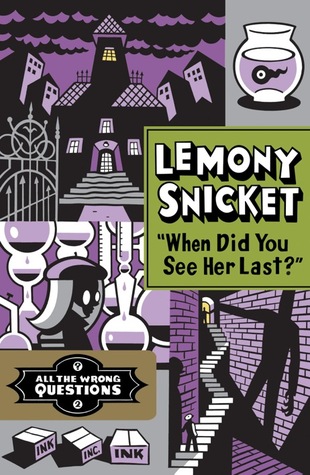 When Did You See Her Last by Lemony Snicket
Series: All the Wrong Questions #2
Published by Little Brown Books for Young Readers on October 15th 2013
Pages: 279
Buy on Amazon
Goodreads

I should have asked the question "How could someone who was missing be in two places at once?" Instead, I asked the wrong question -- four wrong questions, more or less. This is the account of the second.

In the fading town of Stain'd-by-the-Sea, young apprentice Lemony Snicket has a new case to solve when he and his chaperone are hired to find a missing girl. Is the girl a runaway? Or was she kidnapped? Was she seen last at the grocery store? Or could she have stopped at the diner? Is it really any of your business? These are All The Wrong Questions.

Short & Sweet: Lemony is still in the town Staind by the Sea and has a new case to solve, a missing girl who supposedly ran away, but there seems to be more to story than that. Unfortunately, he asks the wrong question again and has to do more work solving the crime and finding the girl. Which in turn brings him closer to the villain that really matters. Another note of curiousity is his sister, who is in the same business as him, working in another area and a note of concern comes up about her in this book. I'm hoping the next book will having them reunited as I would very much like to meet her as a character.

Final Verdict: When Did You See Her Last is a solid sequel that keeps the momentum of the series going, adding more intrigue to the overlying plot while having a solid mystery found and solved as well.

2 responses to “Book View: When Did You See Her Last”