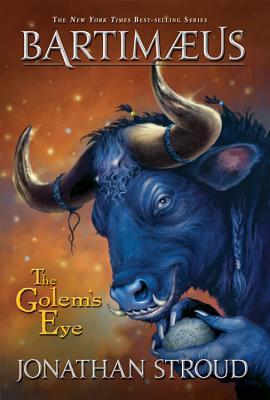 At only fourteen, Nathaniel is a rising star: a young magician who is quickly climbing the ranks of the government. There is seemingly nothing he cannot handle, until he is asked to deal with the growing Resistance movement, which is disrupting London life with its thefts and raids. It’s no easy task: the ringleader Kitty and her friends remain elusive, and Nathaniel’s job-and perhaps his life-are soon at risk. As the pressure mounts, he is distracted by a new series of terrifying attacks in the capital. But is it the Resistance again, or something more dangerous still? To uncover the perpetrators, Nathanial must take desperate measures: a journey to the enemy city of Prague and-worse-summoning once again the troublesome, enigmatic, and quick – witted djinni Bartimaeus.

A thrilling sequel to the best-selling Amulet of Samarkand, The Golem’s Eye is a roller-coaster ride of magic, adventure, and political skullduggery, in which the fates of Nathaniel, Bartimaeus, and Kitty explosively collide.

Short & Sweet: The second in the series, The Golem's Eye takes place just a little after the first book and Nathanial and Bartimaeus are reunited quickly. Not only does it follow the wizard and the demon, but also Kitty, a girl who is a part of the resistance. I really love Kitty's strength of character and Bartimaeus' witty humor. Nathanial still needs some work on his moral attitude, but I have high hopes for him in the next book. The narration was fantastic as usual and really brought the story along nicely.

Final Verdict: A fantastic sequel with more intrigue and fantasy. I cannot wait to finish out the trilogy with the last book.