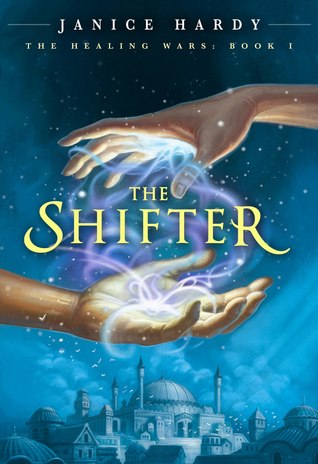 Nya is an orphan struggling for survival in a city crippled by war. She is also a Taker—with her touch, she can heal injuries, pulling pain from another person into her own body. But unlike her sister, Tali, and the other Takers who become Healers' League apprentices, Nya's skill is flawed: She can't push that pain into pynvium, the enchanted metal used to store it. All she can do is shift it into another person, a dangerous skill that she must keep hidden from forces occupying her city. If discovered, she'd be used as a human weapon against her own people.

Rumors of another war make Nya's life harder, forcing her to take desperate risks just to find work and food. She pushes her luck too far and exposes her secret to a pain merchant eager to use her shifting ability for his own sinister purposes. At first Nya refuses, but when Tali and other League Healers mysteriously disappear, she's faced with some difficult choices. As her father used to say, principles are a bargain at any price; but how many will Nya have to sell to get Tali back alive?

Short & Sweet: Living in a world where her talents are thought of as dangerous, Nya must hide what she can do from all but those she is closest too. When her sister Tali is in peril, she must learn how to use her skill to help bring her sister back from the edge of death while not being captured herself. Nya finds herself doing things she would never have considered with any other option, but she must do what she can to get her sister back. I loved the dynamic between them and how Nya perseveres through the different trials thrown in front of her.

Final Verdict: The Shifter proved to be an enjoyable read and while reading it I especially loved the characters as well as the unique world. I can't wait to read on into the series. Definitely a series for those who enjoy an intriguing storyline with magical qualities to it.

3 responses to “Book View: The Shifter”