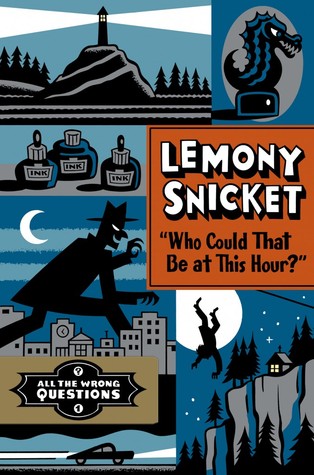 Who Could That Be At This Hour? by Lemony Snicket
Published by Little Brown Books for Young Readers on October 24th 2012
Pages: 258
Buy on Amazon
Goodreads

In a fading town, far from anyone he knew or trusted, a young Lemony Snicket began his apprenticeship in an organization nobody knows about. He started by asking questions that shouldn't have been on his mind. Now he has written an account that should not be published, in four volumes that shouldn't be read. This is the first volume.

Before you consider reading "Who Could That Be at This Hour?" ask yourself these questions:

1. Are you curious about what is happening in a seaside town that is no longer by the sea?

2. Do you want to know more about a stolen item that wasn't stolen at all?

3. Do you think that's any of your business? Why? What kind of person are you? Really?

4. Who is that standing behind you?

The first volume in the four-part autobiographical account of his childhood, called All the Wrong Questions, will be released on Oct. 23, 2012. This will be Snicket’s first new series since the wildly popular A Series of Unfortunate Events.

Short & Sweet: It has been a while since I read Snicket's other books, but I instantly saw the connection between The Series of Unforunate Events and this new series. I love that it delves into another side of the world that intrigued me in the first story. There's a sense of mystery throughout the story and there's a cheekiness to Snicket's writing that I really connect to. I love that this book is about Lemony himself and will hopefully connect and reveal some of the mysteries that were underlying in the first series.

Final Verdict: Filled with mystery and strange characters, I really enjoyed this book and cannot wait to see where the series goes from here.

One response to “Book View: Who Could That Be at This Hour?”