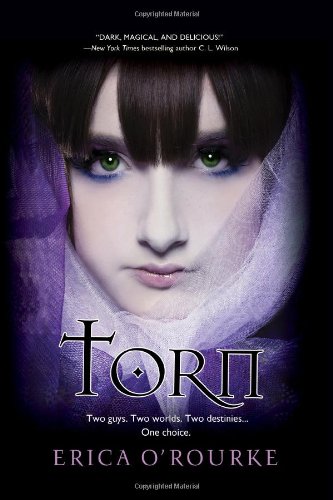 The Book Monsters is happy to welcome Lena from Erica O'Rourke's Torn.

Everyone has secrets.
Even best friends.

Swirling black descends like ravens, large enough to block the glow of the streetlights. A dull roar starts like a train on the 'L', a far-away rumbling that grows louder as it pulls closer, until it's directly overhead and you feel it in your chest, except this doesn't pass you by. Verity, white-faced and eyes blazing, shouts through the din, "Run, Mo!"

Mo Fitzgerald knows about secrets. But when she witnesses her best friend's murder, she discovers Verity was hiding things she never could have guessed. To find the answers she needs and the vengeance she craves, Mo—quiet, ordinary, unmagical Mo—will have to enter a world of raw magic and shifting alliances. And she'll have to choose between two very different, equally dangerous guys—protective, duty-bound Colin and brash, mysterious Luc. One wants to save her, one wants to claim her. Which would you choose?

Everyone knew that Verity and Mo were so close, they were practically Siamese twins. So when Verity died, we all expected Mo would lose it a little bit – especially when people started talking about her family being involved. People at school think it’s just grief, but they’re not looking hard enough. Something else is going on.

There’s the bodyguard. The way she keeps disappearing. And there’s the other guy, the one she won’t talk about, who Verity was seeing before she died.

If she’s not careful, Mo’s going to lose everything she’s worked for. The problem is, she thinks she has nothing left to lose. And that’s exactly when people are the most dangerous.

———-
Learn more about Lena, Torn and Erica O'Rourke at: