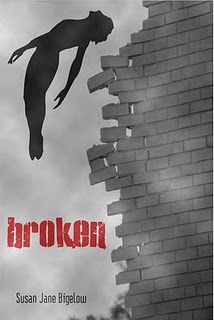 Today,  author Susan J. Bigelow is here to talk about her cover and how it came to be.

In a post-war future world where First Contact has been made, humans are colonizing the stars, and the nations of Earth have been united under a central government, Extrahumans are required by law to belong to the Union. When a young man with visions of the future sets out on a mission to define the course of human history, he encounters a devastated former hero, a fascist dictatorship bent on world domination, and the realities of living in a society where affiliation is everything.

Your cover is very unique. Did you design it yourself?

No, my editor/publisher, Kate Sullivan, designed it! She has many talents. I do love the way it looks, it's definitely a unique cover and I think it reflects the mood of the story perfectly.

What kind of input, if any, did you have in the final result of the cover?

I had a lot of input, actually. I was originally asked if I had any ideas, which, because my mind just doesn't work that way, I didn't! So then I was presented with several possible covers, which was incredibly cool to see. Some of the ones we didn't pick were outstanding. Once I picked the one I liked best, we worked to make some little design tweaks, and it was set. I think the only thing I really changed was the color of the title text, which was black and is now red.

What you want readers and/or potential readers to get out of the cover?

I want people to be drawn into this world. I think the cover says an awful lot about the mood of the world, from the gray skies to the crumbling wall. It's also a mysterious cover, the figure is in silhouette and the viewer doesn't know whether she's flying or falling. I'd hope someone would see this cover and want to know more about the story inside.

It looks like a few different techniques were used in creating the cover. Can you tell us a little bit about how a cover comes together?

Let me turn this over to Kate:

Hi there! Kate here, reporting in from the design end of things.

Every cover comes together differently – it all depends on the “feeling” of the book, and what will work best for its mood, setting, characters, etc.. For Broken, I knew right away that I wanted to see a flying/falling figure on the cover, something that could represent the character of Broken on a really gut level. Some books want images of people; some books want a more symbolic cover – Broken was one of the latter, for me. I started playing around with silhouettes of leaping or tumbling women, against different backgrounds – I think a few of the variations we went through had a dramatic sunset, or a sharp set of rocks at the bottom of a cliff. The bricks really seemed to work with the dystopian aspect of the story, though, and I loved that you wound up unable to tell if the figure on the cover was flying or falling – it seemed right for Broken, being as, well, broken as she is.

The hardest part of this cover, honestly, was getting the fonts right. Sometimes I'll go into a cover knowing exactly what image I want to use, and sometimes I'll go in knowing exactly what fonts I want. In this case, I had an idea of what I wanted to see on the cover, but no idea how to get the font right. I must've gone through something like 40 different “stencil” fonts and old Soviet-era typefaces before I found the two that really worked, giving the book the right sort of rundown, industrial feel that didn't take away from the art!

If you could have any scene from Broken be on the cover, which would it be and why?

There's a scene when Broken jumps out of an aircraft flying thousands of feet above the ground without a parachute. For sheer excitement, maybe I'd choose that one!