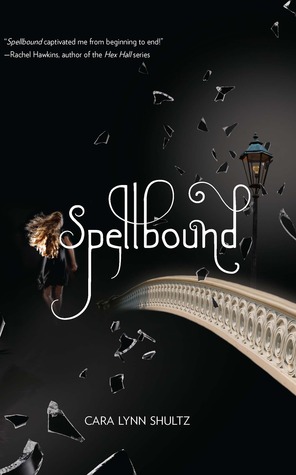 What's a girl to do when meeting The One means she's cursed to die a horrible death?

Life hasn't been easy on sixteen-year-old Emma Connor, so a new start in New York may be just the change she needs. But the posh Upper East Side prep school she has to attend? Not so much. Friendly faces are few and far between, except for one that she's irresistibly drawn to—Brendan Salinger, the guy with the rock-star good looks and the richest kid in school, who might just be her very own white knight.

But even when Brendan inexplicably turns cold, Emma can't stop staring. Ever since she laid eyes on him, strange things have been happening. Streetlamps go out wherever she walks, and Emma's been having the oddest dreams: visions of herself in past lives—visions that warn her to stay away from Brendan. Or else.

Spellbound is every thing I love about past life type novels, while having a tiny bit of what I don't. At sixteen, Emma has had more than enough of her fair share of tragedy. Ready to make a new start she moves to New York to live with her Aunt… and discovers that the past has a way of repeating itself.

I love me a decently paced romance. The tension building… the stolen glances… all of it coming together to make me fall in love along with our characters. Sadly, Spellbound skipped a lot of that. It was eyes locking… skip a few pages… doubt… skip a few pages…then our main characters are in it deep. Now, there was nothing wrong with Emma and Brendan's romance per se. But I wanted more from it. I wanted to care about them. Root for them. And I found it coming maybe a little too late.

The best part about Spellbound? Hands down, the past. The history of Emma. The history of the necklace. The whole look at the past made this book for me. I wish that whatever magic Cara Lynn Shultz was using when she wrote the book had carried over to the rest of the novel.

All the elements were there to make this an outstanding novel, but its execution caused it to sometimes fall flat. Prime example? The ending. Shultz builds and builds to what could be an epic ending… and then it's over in what seemed like a flash. With everything wrapped in a pretty bow. While it definitely worked for the story line, like the rest of Spellbound, I wanted more from it.

Spellbound was an entrancing read. I'm sketchy about romance in YA these days, especially when it involves paranormal elements, because it seems like every other one I read lets me down and annoys me. So, I was excited when this one really was different. The romance was great, both Emma and Brendan had to give up something, had to struggle to keep things going, to keep from dying (literally). There were still the typical ups and downs, but when they decided they wanted to be together towards the end, it finally all worked out and I went YAY inside.

I like the story behind this pairing, how it's a curse that needs to be broken and who actually ends up breaking it in the end. And to be honest, the side characters really made this novel for me. There's two supporting characters that really put themselves out there for Emma, one is a witch and the other is a gay guy. They were so colorful and had a larger role than normal side characters do and I just loved seeing them in the book. I definitely think that this wasn't the perfect novel, the action was lacking for me, but it was nice to have a normal bad guy for once (besides the curse).

All in all, something enough different with colorful characters really made this a stand-out book for me.