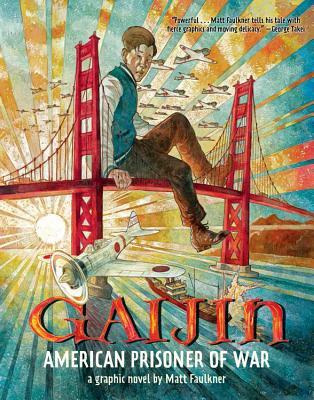 With a white mother and a Japanese father, Koji Miyamoto quickly realizes that his home in San Francisco is no longer a welcoming one after Pearl Harbor is attacked. And once he's sent to an internment camp, he learns that being half white at the camp is just as difficult as being half Japanese on the streets of an American city during WWII. Koji's story, based on true events, is brought to life by Matt Faulkner's cinematic illustrations that reveal Koji struggling to find his place in a tumultuous world-one where he is a prisoner of war in his own country.

Gaijin was one of my favorite graphic novels I read for the CYBILs award panel. Taking place during World War II, it’s from the perspective of a half-Japanese teenager who is forced from his home with his mother to live in an internment camp. Suffering from bullying by the other teens in the camp, Koji finds himself trying to fit into the gang and getting into even more trouble. His mother is doing her hardest to stay strong for their family, but Koji seems to think that the men in the camp are taking advantage of her and says some cruel words.

I feel like this part of history is somewhat our dirty little secret here in the United States. While it’s not necessarily left out of the history books, it feels like we did something so similar to the Germans during this war that it is a topic that leaves many uncomfortable. Racism still exists today and it’s sad to look back on this time in history and know what we did was wrong. Suspecting people just because of their race does not justify the cruelty we put our Japanese Americans through during this time period.

The story is well written and the graphic design is amazing. I find Gaijin to be an overall appealing graphic novel that will introduce the topic to middle grade and teen readers who may not realize what it was like to be placed in one of these internment camps.

With stunning visual design, this graphic novel transports you back in history, living as a teenager during a turbulent time in America.