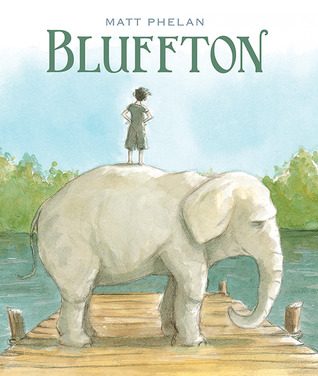 In the summer of 1908, in Muskegon, Michigan, a visiting troupe of vaudeville performers is about the most exciting thing since baseball. They’re summering in nearby Bluffton, so Henry has a few months to ogle the elephant and the zebra, the tightrope walkers and — lo and behold — a slapstick actor his own age named Buster Keaton. The show folk say Buster is indestructible; his father throws him around as part of the act and the audience roars, while Buster never cracks a smile. Henry longs to learn to take a fall like Buster, "the human mop," but Buster just wants to play ball with Henry and his friends. With signature nostalgia, Scott O’Dell Award–winning graphic novelist Matt Phelan visualizes a bygone era with lustrous color, dynamic lines, and flawless dramatic pacing.

Henry's life just got better the summer Buster Keaton stayed in Bluffton with his troupe of performers. All Henry wants to do is learn more about being a vaudeville performer, but Buster just wants to be a normal kid. I love the interactions between Henry and Buster, both craving for a life they do not have.

I loved Phelan's previous graphic novel and was drawn into this book by his beautiful illustrations. The characters and time period were really brought to life through this medium. I find that I really love historical stories set in graphic novel format. It really brings that time period to life and puts the reader directly into the story line.

The plot was one of friendship and growing up in a time unique unto itself. I look forward to more of Phelan's fantastic graphic novels.

Final Verdict: A solid historical graphic novel that readers can transport themselves into a time period unlike their own. Appropriate for elementary and middle school students as well.