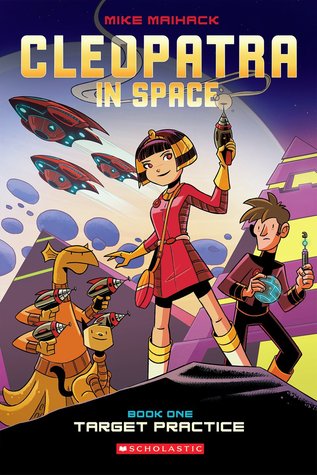 A funny, action-packed graphic novel featuring fifteen-year-old Cleopatra -- yes, THAT Cleopatra -- who's transported to the future and learns it's up to her to save the galaxy!When fifteen-year-old Cleopatra (yes, THAT Cleopatra) finds a mysterious tablet that zaps her to the far, REALLY far future, she learns of an ancient prophecy that says she is destined to save the galaxy from the tyrannical rule of the evil Xaius Octavian.She enrolls in Yasiro Academy, a high-tech school with classes like algebra, biology, and alien languages (which Cleo could do without), and combat training (which is more Cleo's style). With help from her teacher Khensu, Cleo learns what it takes to be a great leader, while trying to figure out how she's going to get her homework done, make friends, avoid detention, and everything else that comes with being the future queen of the universe!

Cleopatra just wants to get out of learning algebra, and ends up on her own time travel adventure in the first volume of Cleopatra in Space. I’d liken this series to a more mature Zita the Spacegirl. Cleopatra still isn’t enthusiastic about school, even when she travels ahead in the future. In fact, the only classes she really enjoys are combat and target practice with awesome ray guns. She’s told when she arrives that she is the one who will save the universe from the evil Xerx.

As this is the first volume, we only get a glimpse into her first adventure as she is asked to relocate a key. This ends up being a more dangerous mission than most students her age receive, but it looks as though they are running out of time to train Cleopatra to lead them into victory.

I really loved that Cleopatra wasn’t instantly good at everything and took the whole “you’re here to save the world” as they were crazy instead of embracing it and flaunting it. I can tell the friends she makes in the future will be there to aide her in the future in their own ways. Also, the cats are in charge of this whole program and I love that the importance of cats in Egyptian culture ties over into their role as mentors/leaders of this future.

Beautifully drawn and with an action packed plot, this space adventure is just the beginning of what hopes to be a great graphic novel series.