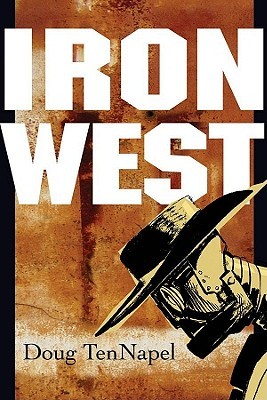 Preston Struck is an incompetent outlaw with a heart of fool's gold. He discovers an army of metal men bent on destroying central California. While Struck avoids any form of heroism, he gets a little help from a magical old shaman and his sidekick Sasquatch. Struck is going to need all the help he can get because he's deputized just as the mechanical men have taken over the railroad and are mutating the train into a giant demonic iron monster.

As a fan of Doug TenNapel, I cannot resist looking for more graphic novels by him and found Iron West at the library one day. I often do not know what to expect with his work as it takes on a life of its own quickly. Iron West combines living machines with the Wild West in a crazy fun adventure that also involves Bigfoot and a giant train monster. For once, this one is also a little less appropriate for kids, with a couple of more naughtiness, but still full of adventure. I'd say most middle school and high school students would be fine with the content, but not exactly elementary aged material.

I love the way the setting and sci-fi elements are combined, creating quite a crazy adventure for Preston, a man who is not often one to be called a hero. In fact, he's only in town to take time with Miss Sharon, who is not sure why she followed him to such uncivilized territory. Actually, upon trying to escape, Preston seems to be forced into becoming a hero by trying to stop the machines from killing every human in sight. With a bit of nudging from Bigfoot and a little American Indian woman, he actually starts back to try to save Miss Sharon and everyone else in town.

Of course, he goes about it in his own crazy way, with antics that will have you laughing. Overall, I fell in love with another of Doug's graphic novels and probably will never find one that does not make me laugh, smile and become awestruck by the amazing illustrations and engrossing stories.

Final Verdict: A new favorite mix for me – westerns and sci-fi, makes a great story and visually was a lot of fun. Definitely for older readers.