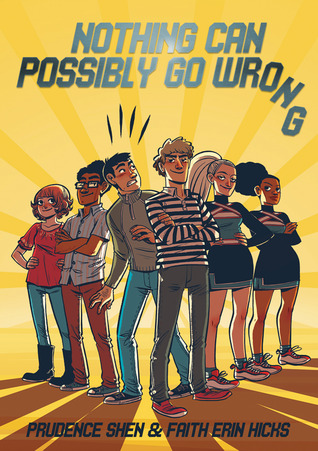 You wouldn’t expect Nate and Charlie to be friends. Charlie’s the laid-back captain of the basketball team, and Nate is the neurotic, scheming president of the robotics club. But they are friends, however unlikely—until Nate declares war on the cheerleaders. At stake is funding that will either cover a robotics competition or new cheerleading uniforms—but not both.

It's only going to get worse: after both parties are stripped of their funding on grounds of abominable misbehavior, Nate enrolls the club's robot in a battlebot competition in a desperate bid for prize money. Bad sportsmanship? Sure. Chainsaws? Why not. Running away from home on Thanksgiving to illicitly enter a televised robot death match? Of course!

I have enjoyed Faith Erin Hicks’ graphic novels before and was looking forward to this latest release. Hicks’ artwork always draws me into the story and really brings her characters to life. The story behind this book is that of Charlie, a boy who is the captain of the basketball team, former boyfriend of head cheerleader and mean-girl Holly and sort of a quiet laid back kind of guy. So when his friend and neighbor Nate tries to run for student council to save the budget of the robotics team, the cheerleaders retaliate by forcing Charlie into running against him.

What occurs next is quite an interesting situation for Charlie and he finds he can’t just let it all work itself out like he usually does. He has to take an active role in making both parties happy so it doesn’t ruin his own life. I love Charlie, who is a guy who just wants to get through high school with as little drama as possible. Unfortunately, that isn’t working out for him. Nate cracks me up with his crazy bad driving skills and his geeky appeal. My favorite character has to be Joanna, the one girl who is on the robotics team and I just love her attitude and geek charm.

Final Verdict: Overall, Nothing Can Possibly Go Wrong is a fun and exciting read that really pulls the reader in until the end. Awesome illustrations and great characterization make this graphic novel a must-read for teens.