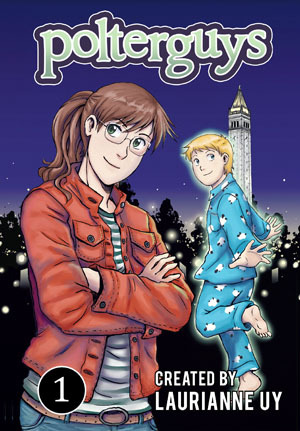 Bree is a smart but socially awkward college girl who ends up moving into a house that's haunted by five ghost guys. She's the only one who can see these ghosts so she has to help them resolve their unfinished business.

In Polterguys, Bree is a nerdy college student who is studying to become a doctor, but is a bit awkward when it comes to relationships. When she moves into a house haunted by five guy ghosts, she is a bit put off, but soon learns to live with her new roommates. When a strange man comes out of nowhere and tries to take them through a portal, she promises to help them resolve whatever is keeping them there. The only problem is, they have no idea who they are or what their lives were like before they were ghosts.

I really loved the art style in this graphic novel. It’s a little more manga styled, but still with more realistic features. I loved Bree’s character design along with the guys. I’m looking forward to seeing more of her artwork in future volumes.

The end of the first volume surprised me. I was expecting that Bree would have more time or more difficulty in finding information on one of the characters. Also, I’m really intrigued as to the character who popped out of nowhere and tried to start snatching the ghosts. I’m not sure what role he will play in later volumes, but I’m looking forward to seeing more of him.

Overall, I loved the artwork and the overlying plot along with the silly moments in Polterguys. It wasn’t perfect, but I’m hoping it will pick up more in the next volume.