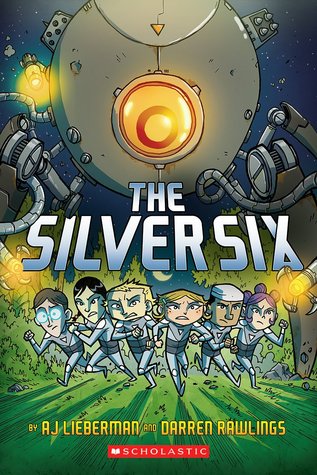 A group of orphans on the run search for a new home among the stars.

When a group of orphans discover they have a common connection, plucky heroine Phoebe leads them in a daring escape from their orphanage to an uninhabited moon. But their idyllic paradise is shattered when the powerful corporate boss who caused the deaths of their parents sends a relentless henchman to track them down. Now, with nowhere left to turn and tired of being on the run, these resourceful kids decide there's only one thing left to do: Fight back!

Plot: Phoebe is a young orphaned girl who lives with her robot Max and has gone undetected since her parents passed away. All that is about to change as someone is after her, or rather something that her parents left behind. At the orphanage she is taken to, Phoebe meets five other kids whose parents were killed in the same accident. Together, they must find out why their parents were killed and how to save the world. A fast-paced sci-fi adventure, The Silver Six is a graphic novel that will have readers turning page after page.

Characters: Phoebe is a smart character who knows how to go undetected. She has the sense to remain in school and pretend that things are normal so that she won’t be taken away from her home. Her robot Max cracks me up and I grew fond of him quickly. I love the intereactions between Phoebe and her robot as well as the other orphans. There’s an obvious quality of geekiness to the six children which leads to quick thinking and being able to think themselves out of many dangerous situations.

Graphics: I loved the artistry in this graphic novel. I have a thing for full color as well and I felt like it brought the world to life. The science fiction themes run strong throughout the novel and are reflected in the costumes and architecture of the world.

Final Verdict: A great graphic novel that will have fans of Zita the Spacegirl and all things graphic novel reading on until the end.