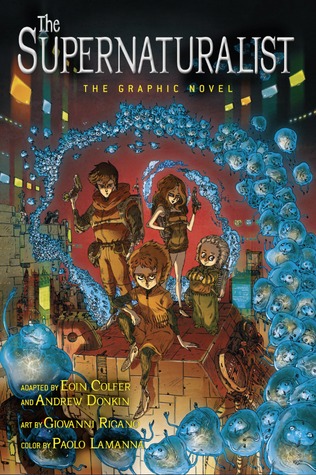 Unwanted by his parents, Cosmo Hill is put to work by the state, testing highly dangerous products. Cosmo realizes he must get away, and escapes with the help of the Supernaturalists, a group of kids who have the same special abilities as Cosmo--they can see supernatural Parasites, creatures that feed on the life force of humans. The Supernaturalists patrol the city at night, hunting the Parasites in hopes of saving what is left of humanity in Satellite City. But soon they find themselves caught in a web far more complicated than they'd imagined, and they discover a horrifying secret that will force them to question everything they believe in.

With stunning art and nonstop thrills, The Supernaturalist: The Graphic Novel will delight fans already familiar with the story and dazzle readers discovering it for the first time.

Plot: I read the novel version a couple years ago and fell in love with the story and Colfer's writing. I was excited to find a copy of the graphic novel at the library and eagerly dove into it. The story was well done and transformed well into a graphic novel. I love the exciting plot of this book, where there are creatures that take energy from humans and a group of kids that try to fight them. Little do they know what their real purpose is and find that these creatures may be different from what they originally thought.

Characters: Set in a dystopian world, the characters are orphans and full of life.Cosmo is an orphan recently abandoned as dead from the boys' orphanage that actually uses them as guinea pigs for all sorts of testing. Cosmo has gone through a lot in his short life and is glad to finally have escaped, if he was left for dead and given new parts to fix him as good as new, but looking quite different. I love the personality differences within the crew, making for a diverse set of kids. I really wish Colfer had written a sequel to this book because I loved the world and characters so much.

Graphics: I loved the illustrations in this graphic novel and felt the artist really brought the world and characters to life. I think this is the same group that worked on the Artemis Fowl graphic novels, which I enjoyed as well.

Final Verdict: A great adaptation that is visually stunning and possibly one of the best stories I have read.

One response to “Graphic Novel Review: The Supernaturalist”