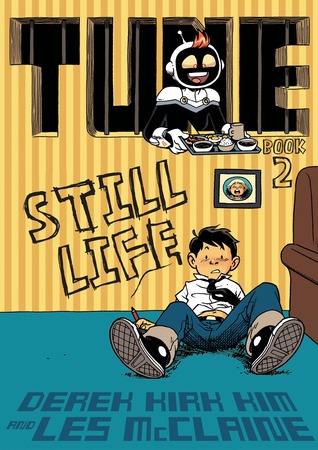 In the second installment of the TUNE series of graphic novels, our hapless hero Andy Go is settling into life in an alien zoo...as one of the exhibits. It's not so bad: the food is good, and his environment is a perfect copy of his house back on Earth. But everything falls to pieces when Andy realizes he's been tricked: there will be no weekend visits back to Earth, as he was promised, and his contract doesn't last one year...it lasts a lifetime. Funny, sweet, and incredibly goofy, TUNE is Derek Kirk Kim writing at the top of his talents. Tune: Still Life introduces artist Les McClaine, who brings a new level of sensitivity to the story. Fans of the first volume will be delighted by this new entry in the series.

Ever since reading the first book, I have been dying to get my hands on Tune Still Life, the next volume in a series about a boy named Andy Go who becomes a part of a zoo in space. He’s the only one in the human exhibit at this point, but soon there will be a female, and who better it to be than Yumi – the girl who he recently found out likes him back. Before he thinks of this, he is miserable and even Dash – the nice female alien that brings him food – cannot cheer him up.

When Andy realizes that Yumi could be with him, he makes a deal with Dash – who is interested in making art, something foreign to the aliens. The only problem is that the Yumi who shows up is one from another dimension, one in which he cheated on her repeatedly. In the meantime, he has made a new friend in the cell mate next door, named Mo. They talk through one of the vents and he’s a boon to Andy, since he has been there longer and knows more about the zoo.

I loved the reveal at the end of the graphic novel – I won’t spoil it, but it makes me dying for the next volume of Tune already. I love the interactions with the aliens and seeing an average guy like Andy become a spectacle in a zoo. The illustrations are dynamic and really make the story come to life. I love the design of the aliens and the idea of this zoo being in their world, collecting specimens from other places.

Final Verdict: Tune Still Life is a lively second volume to a series that I cannot wait to read more of. Andy is a hilarious character to watch transform and I love seeing this different side of Yumi, since we’ve only really seen her a little through Andy’s own eyes.