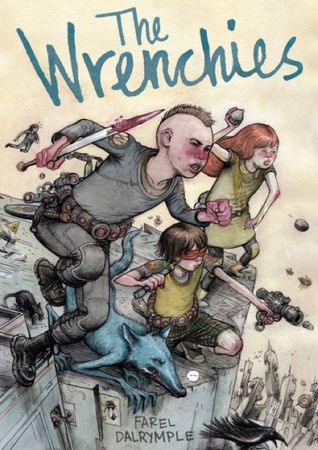 They're strong, powerful, and if you cross them, things will quickly go very badly for you. Only one thing scares them—growing up. Because in the world of the Wrenchies, it's only kids who are safe... anyone who survives to be an adult lives in constant fear of the Shadowsmen. All the teenagers who come into contact with them turn into twisted, nightmarish monsters whose minds are lost forever.

When Hollis, an unhappy and alienated boy, stumbles across a totem that gives him access to the parallel world of the Wrenchies, he finally finds a place where he belongs. But he soon discovers that the feverish, post-apocalyptic world of the Wrenchies isn't staying put... it's bleeding into Hollis's normal, real life. Things are getting very scary, very fast.

Farel Dalrymple brings all his significant literary and artistic powers to bear in his magnum opus—a sprawling, intense science fiction tale that has at its heart the uncertainty and loneliness of growing up.

The Wrenchies was a beautiful read, if not a bit confusing. I loved the artwork, I loved the settings and the colors used to portray a post-apocalyptic world where only children survive. Once you close in on adulthood, the Shadowmen come for you. These kids form gangs and this one follows the Wrenchies, a group that is filled with interesting characters. Unfortunately, after killing some Shadowmen, they find their name written on a paper and know that they are after their gang, who seem too good at killing off the wretched, freaky creatures that look like warped men in suits.

Then it gets even trippier as multiple dimensions are introduced. The basic premise being that the creator of this world and the Shadowmen is a comic book artist, who has been captured and needs to be rescued. The scientist, a large towering man that is somewhat of a legend is supposed to guide them and brings in characters from other worlds – include a set of grown Wrenchies from the comic series and a boy named Hollis, a chubby boy who wears a superhero costume everywhere.

As much as the plot got a bit messy and at times, I reread and went back to see if I had missed something, I realized I would just push past and enjoy the ride. I loved the illustrations, the characters that were built. It’s a bit gory at times, and the Shadowmen shove their fingers in the eyes of their victims which is quite an appalling way to meet your end. I like the length, giving enough space for the plot to push around into some strange events.

A messed- up graphic novel, in both good ways and bad. Not a book for everyone, but one I enjoyed and may even reread.