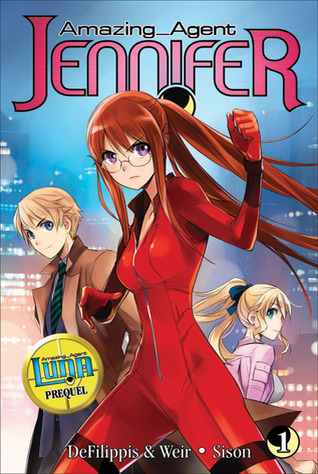 A spin-off straight from the pages of Amazing Agent Luna

Long before Luna’s hard-as-nails boss known simply as "Control" became a top agent, Jennifer Kajiwara was a rookie. From Jennifer’s freshman year in the Agency, through her struggles with her parents and her grueling training, to her first dangerous mission as a field agent (and first big romance!), being a young secret agent is never easy.

Jennifer must learn the hard way how to play deadly spy games as she becomes embroiled in a secret war full of intrigue, betrayal, and deadly consequences. This is the first volume of a two-volume spin-off that will tie directly into events in future volumes of Amazing Agent Luna.

I had no idea when I picked up Amazing Agent Jennifer Volume 1 that I had found a hidden gem. Not having read the other series about Luna, I was glad it was a prequel instead of a sequel series. I will definitely look into that series next though. Jennifer is an overachieving student whose father is overbearing and will not even let her take a few extra college courses so she can have a wider variety. After a heated argument with her father, she is approached by The Agency as a candidate for their spy program. With the prospect of being able to take her own courses and have them paid for, she agrees readily.

Unfortunately, when her father finds out, he is overly upset and Jennifer stubbornly does not back down. This creates a rift where she basically does not see her parents for the rest of her college career. Instead, she throws herself into her homework and weekend training sessions with The Agency. There she is Agent K and finds a friend in Agent L. The two of them become closer than Jennifer feels comfortable with, but as they are the only two trainees to move on, she cannot resist becoming even closer to L, or rather, Dan.

Their first assignment is even together and Agent Control, their recruiting agent even comes out of retirement to help with the mission. Jennifer's studies in high school have led to further research by others overseas and it is her job to find the information and then torch it so they cannot use it. Problems occur and Jennifer soon finds herself in a dangerous situation. Will Dan be able to save her?

I loved everything about this book from Jennifer's steadfast, bookish but kickbutt character to the crazy roommate and cute love interest. The illustrations are amazing, so clean and beautiful, portraying the characters so well. There's a cliffhanger at the end of this one, so make sure you have the second before starting this one.

Final Verdict: Trust me, this is a great two-part manga series that you don't want to miss.