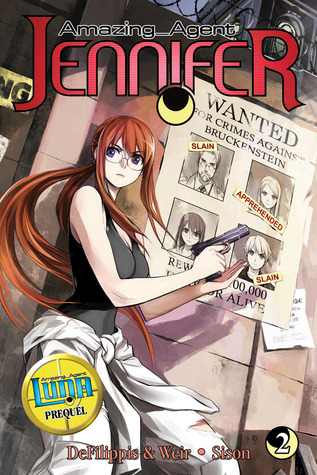 When Jennifer Kajiwara was a rookie agent, well before she became Luna’s no-nonsense handler Control, she excelled in her freshmen year at the Agency.

Unfortunately, her first field mission does not go as planned. When an important political figure is assassinated, Jennifer and her team become fugitives in the rogue state of Bruckenstein.

Determined to learn the truth about the murder, Jennifer discovers that she may have been betrayed by someone close to her—and even worse, there is a conspiracy that goes deeper than she ever imagined. In a game of love and espionage, Jennifer will be forced to question everything she believes to be true. The answers she finds lead to an ultimate showdown that will either break her or turn her into a master agent.

Taking off right after the cliffhanger of the first volume, Amazing Agent Jennifer Volume 2 starts with action, as Jennifer is questioned and almost killed. What she discovers is that the assassination of the head of Bruckenstein was planned, and Agent L was involved in the plot. What she doesn't understand is why, but she realizes she must do the right thing and turn him in.

Almost stubbornly so, Jennifer is all about the mission and L has broken protocol. Even if that means he did it for a future for the two of them, away from the spy business. There are many dramatic moments in this volume, including a reunion with her former roommate that has her questioning why she left the Agency. Agent L is gone, but she feels guilty that his body was left in a foreign country. Therefore, she asks Control to take her back to retrieve and bury his body back home.

This is easier said then done, but Jennifer manages and decides it may be time to reinstate her status as an agent of The Agency. Instead of doing field work this time, she will be working on a scientific development, the one she started in high school. Which leads to the Amazing Agent Luna series, which I haven't read but now am dying to.

Final Verdict: I love short series of manga because they close an arc easily and it's not drawn out. But I am dying for more and will have to seek out the series which prompted this prequel series. The illustrations are amazing and the story keeps the reader engaged, definitely a manga series I highly recommend!