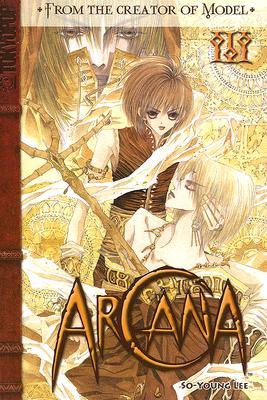 When Mong is captured and frozen in a cage, Inez and the gang begin an intense rescue mission. Salvation rests in the form of a magic key for which Inez searches in the hope of releasing Mong. But black magic is in the air as the group fights a villainous elf. Just as victory seems near, another danger looms in the horizon!

Taking off in the realm of Elves, Arcana Vol 3 finishes off the adventure of saving Inez from capture, along with her companions. The elf who has put his daughter under a spell finds that he must reverse the spell or lose his daughter forever. Although as easy as it sounds, there is conflict and Inez parts with Reana still not awakened, but no longer under the care of her father but her dear beloved.

Inez starts to struggle with her feelings for Yulan and someone from her past puts her into a dream sleep that reveals more about her past. I'm really excited about this new character and finding out more about Inez and who she truly is. All the characters of this book have some secret they are hiding and I'm hoping more will be revealed in the next volume.

Final Verdict: Another exciting volume in a series I am really enjoying and would suggest for fantasy and manga lovers.