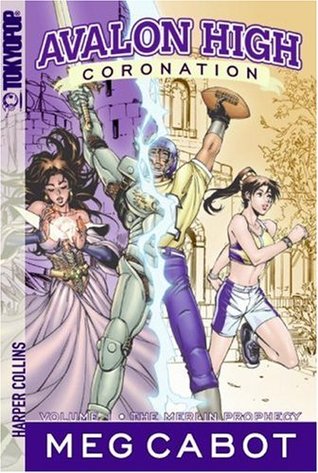 Being a new student at Avalon High has been exciting for Ellie, to say the least--she's an honor student, a star on the track team, and, oh yeah, dating the super-hot class president, Will. Who also happens to be the alleged reincarnation of King Arthur. Ellie couldn't be happier to have Will in her life, but she's also worried that his estrangement from his parents is tearing him apart. To make matters worse, Will's doubt that he really is King Arthur could prevent the Merlin Prophecy--an age of enlightenment--from occurring.

Can Ellie convince Will to believe in something that even she isn't sure about? And more importantly, can she get him to give his parents another chance?With all the mythology and mysticism of AVALON HIGH, Meg Cabot's very first manga is indeed a tale for the ages.

Avalon High was a joy to read, yet frustrating at the same time. This is a continuation of the novel of the same name by Meg Cabot. While I really enjoyed the novel, the first volume of the manga series is almost blah. The beginning was really well done. The back story was given, and all the characters were nicely introduced. Yet for the rest of the first volume, it just seemed a little too repetitive. Ellie is constantly trying to find ways to tell or convince Will of the prophecy. While I understand this is not an easy task, I found the dialogue to be stale. Thankfully, my interest was recaptured by the introduction of the “evil” characters.

All in all, this was not the worst manga I have ever read, but it also was not close to the best. The drawings were pretty well done. I really loved the Arthurian outfits that were included. It gave a nice authentic feeling to it. While I am not too sure, if that is enough to make everyone keep reading, I think that I am willing to give the series another chance and attempt Vol. 2. I honestly hope that the second novel picks this series up a little bit because I really do want to like it, but it just hasn’t given me much of a reason to yet.