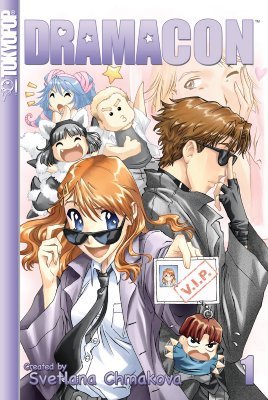 When amateur writer Christie settles in the artist alley of her first ever anime convention, she sees it only as an opportunity to promote the manga she had started with her artist boyfriend. But when she unexpectedly falls for a mysterious cosplayer, things become very complicated. Because what do you do when you fall in love with someone who is going to be miles away from you in just a couple of days? Web-comic vet and Ignatz Award-nominated creator Svetlana Chmakova gives us a funny, romantic, behind-the-scenes look at an anime convention--where sometimes even two is a crowd!

Plot: I love manga about manga lately. I highly suggest Bakuman to those who enjoy Dramacon. This one is about a girl Christie who goes to a con with her boyfriend and falls for a handsome older guy who only has one eye. Her boyfriend is a jerk and they end up in some iffy situations in which this mysterious guy rescues her time and again. The con ends and there’s no resolution between the two, but there’s always next year. I couldn’t seem to put down this book for long the plot really pulled me in.

Characters: I loved Christie and her shy yet outrageous personality. I love how in the book they likened her to intense manga characters that couldn’t really exist in real life. Matt is a broading handsome boy who really drew my interest as a reader and I love how opposite he was from Christie. I’m rooting for the two of them to come together at the end of this series. I loved the way the characters were designed and enjoyed their interactions with each other as well as the other characters in the book.

Final Verdict: A fun graphic novel, with some hard topics in the way of relationships. Definitely a series I won’t be able to get enough of.